A crane operator died yesterday in Whitby Ontario, Canada, after his crane overturned on top of him.  According to local news reports the man worked with Galcon Marine, who it is assumed, owned the crane. The company has a number of lattice crawler cranes, mostly Koehring and Link Belt units fitted with draglines or clamshells with capacitis of up to 50 tons.

We understand that the crane, which was working for Clipper Construction, which trades as Coreydale Contracting, and was working on a soil retaining barrier for a new apartment block being built near the water.

A police constable on the site said that the man had climbed out of the crane to look at the boom, when it overturned and landed on top of him, pinning him to the ground. He was pronounced dead at the scene. A spokesman for the ministry of labour said that the boom was being stripped down at the time.

Either way the result is tragic When we have more information on what actually occurred we will update this article. 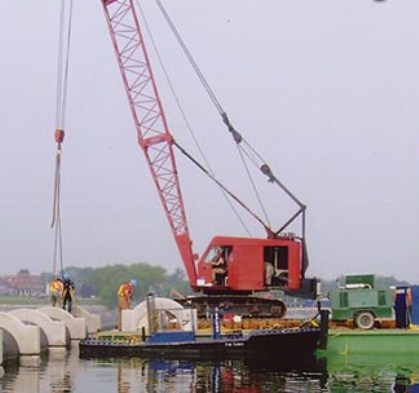 The above picture is one of Galcon Marine’s Link Belt cranes.