A incident with a loader crane at Ipswich docks on Friday night has left one man dead and another seriously injured.

The men were reportedly loading a pontoon or small boat onto the flatbed truck with a knuckle boom loader crane when the truck overturned and crushed the two men.

The photographs that we have been sent indicate that the lift was being carried out with no outriggers set. If this was the case, which is very hard to believe, then the crane was virtually bound to have tipped over. 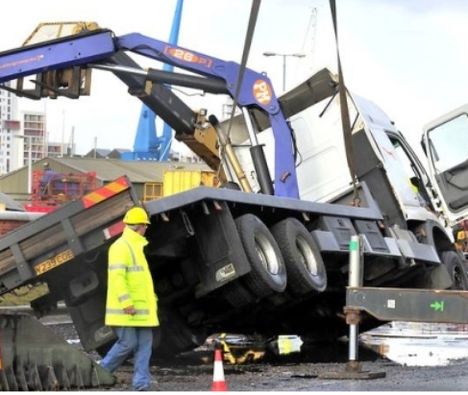 The injured man is in his 40s while the man who died at the scene is said to be in his 50s, both are understood to be local.

The Health & Safety Executive will carry out a joint inquiry with the police to establish what has happened.

The photo we have published appears to have been taken on Saturday morning during the recovery stage. It looks as though no outriggers/stabilisers were set, while poor set up is not uncommon, it is hard to believe that any operator would attempt to carry out a lift without at least putting the legs down.

Interestingly the latest loader cranes force operators to set outriggers and limit the lifting ability according to the outrigger configuration.