A tower crane has crashed on a traffic lane at the crossing of Altysarin and Marechek streets in Almaty, Lenta.kz reports.

The large-tonnage steal crane tore off electric lines and crushed down a Volkswagen car that happened to be drive on the lane at that instance. There was a passenger in the car who got heavily injured. He was taken to a hospital in a critical condition.

One of the witnesses recorded a video of the accident with his car camera: you will notice the crane starting to come down above the tree line on the left side of the highway;

According to the Almaty Emergency Department, Dalabayev, 51, the crane man who was operating the crane when it toppled over was also severely injured in the fall and died in a hospital shortly after.

According to the witnesses, the accident happened during construction works. The tower crane was moving things at the construction site when suddenly started to tilt to one side and then crashed. 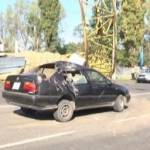