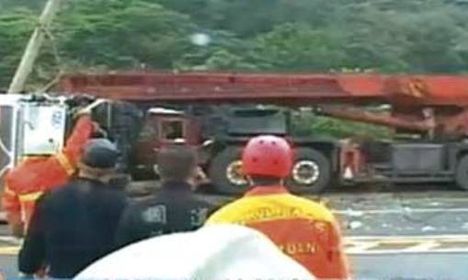 A runaway crane smashed into a bus yesterday in Taiwan killing four people – three women and a man – and injuring a further eight. There were a total of 16 passengers on the bus. The accident involving a dated four axle truck crane, occurred in Guishan, Taoyuan County. The cause has been blamed on a brake failure, the crane hit the bus flipping it onto its side and, according to local reports pushed it for 120 metres before it came to a halt. Other reports also suggest that the crane did not have a road permit, the crane driver survived the accident.

Set the hook, get the click, capture the email , bank the money.