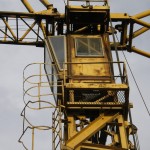 Death toll of the tower crane breaking accident in a building in process in Shenzhen has gone up to six. The manufacturer said the main reason of this accident is the installation by none-specialized person.

On the afternoon of December 28, a tower crane  accident occurred at a building in process named “Phoenix Huayuan” locating at Fuyong Street, Baoan District Shenzhen. Five workers were found dead and one worker was seriously hurt in the accident. According to the report, the rescuers found another person dead yesterday afternoon, and the death toll went up to 6 persons.

Another crane accident in Warsaw