Gloria comes with certain built-in safety options, such as reverse warning and a personal proximity aid system. The cab also offers 90% guaranteed all-round visibility and the latest in ergonomic design. Amongst the many new features in the cabin is the unique, Kalmar patented, side-tilting steering wheel and specially designed joystick control, which also reduces fatigue and improves maneuverability and productivity. 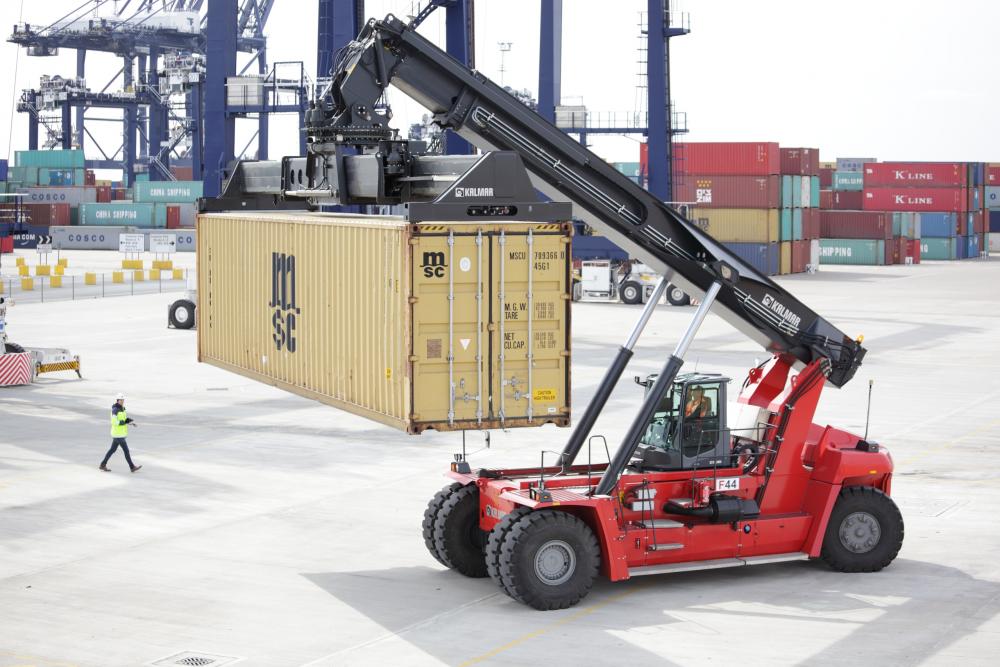 Gloria’s electronics feature a standard, redundant CANbus control system that automatically locates and corrects all failures in the CANbus operation.

With a total lifting capacity of 45 tonnes to six high (five high on the intermodal), Gloria also performs well in fuel efficiency with the following:

· Three new Eco Modes are now included, which provide up to a 20% saving on fuel;

· A further 10% fuel saving can be achieved with the new Start/Stop function; and

Cost of ownership is further reduced with a number of innovative features. Fuel saving has been high on the agenda, and significant economies can now be achieved through the load sensing hydraulics, fitted with variable pumps and a temperature-controlled cooling fan. A tire air pressure control system also contributes to fuel savings and extends the lifetime of tires by up to 10%.

Kalmar has also introduced radical changes to the service intervals and, as a result, calculated significant cost savings across many of the service-related intervals. A two-year or 4,000-hour warranty now comes as standard; the first machine service has been extended from 50 to 500 hours and the hydraulic oil change interval extended from 2,000 to 4,000 hours or more with the Oil Sample Program. Engine oil servicing is now also extended from 500 to 1,000 hours and the servo filter from 500 to 1000 hours.