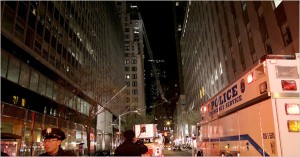 City officials on Sunday suspended the license of a worker who had been operating a 250-foot-high crane before it crashed into a 25-story building in Lower Manhattan, saying he had failed to secure it properly before leaving the site for the day. The operator, Christopher Cosban, had held a top-level crane operating license since 2002, said Tony Sclafani, a spokesman for the city Department of Buildings.