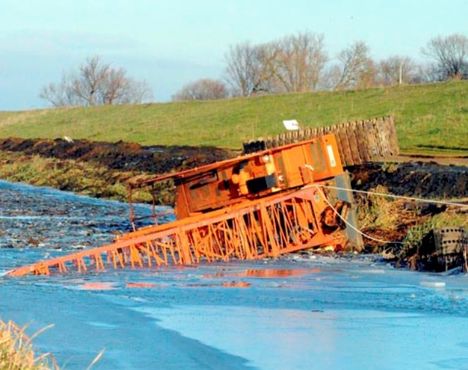 A crane has fallen into a drainage channel in Cambridgeshire, UK today killing the operator.  The accident happened on a riverside track off the A142 at Mepal, halfway between Ely and Chatteris. The crane a small crawler crane with dredging bucket, slipped in when it slipped off of the timber track it was working from.  The emergency services arrived 20 minutes after the accident occurred and used an inflatable boat to reach the crane’s cab. They broke the glass of the cab, allowing the operator’s head and shoulders to be pulled out of the water, but his leg was caught on something in the cab, preventing them from removing him to safety. He never regained conciousness and was formally declared dead two hours later.

The man was working for the Environment Agency which confirmed that he was an employee who had been cleaning the Counter Drain, at Mepal.