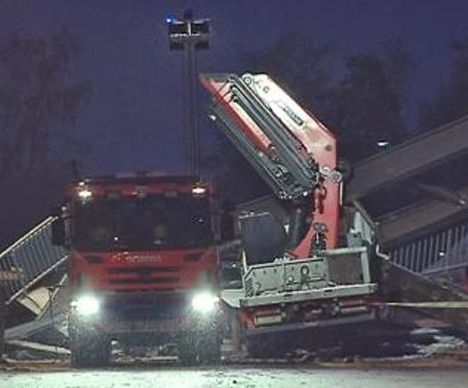 A loader crane left in a raised position while travelling on the road, brought a pedestrian bridge down onto other traffic, during the rush hour in Helsinki yesterday, resulting in one death and three other injuries.  Two other vehicles were involved on the accident in Helsinki’s Laajasalo district, a van which had been travelling in the opposite direction, was hit directly by the falling bridge killing the driver and a disabled persons taxi that then went into the back of the van, injuring the driver and a passenger.  The driver of the loader crane, a large rear-mounted Palfinger, was also injured. The Helsinki police are investigating and may prosecute the truck driver for manslaughter. According to the police this is the third accident in the past few months involving loader cranes that have not been stowed properly.