Continuing the education of trainers or students in the crane and rigging industry is one tangible benefit of the Top Trainer awards program, designed by Crane & Rigging Hot Line magazine and endorsed by the Association of Crane & Rigging Professionals (ACRP).

In addition to other prizes, Jordan and Fuller were each awarded continuing education scholarship, which was made possible through the donations of sponsors, including The Crosby Group and Liebherr. Scholarships can be used to attend industry workshops or conferences, earn certificates or credentials, or participate in various training programs. Scholarships may be used by the recipient or may be awarded in their name to a student of their choice.

Don Jordan, the 2012 Professional Top Trainer, passed his scholarship onto his daughter, Amanda Jordan, who is the Vice President of Operations for AICB. “I gave my scholarship to Amanda because she helped me start the business, and she’s got such a passion for it,” he said. “She gave up a career, for which she was highly recruited, to help grow this business. She now runs it for me.” 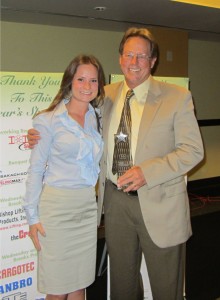 Aspiring to become a trainer herself, Amanda Jordan used the scholarship to attend a Signalperson and Rigger Practical Examiner Workshop through the National Commission for the Certification of Crane Operators (NCCCO) and an Overhead Crane Train-the-Trainer course from NACB Inc. “I learned so much about what goes into making a certified and safe signalperson and rigger,” Amanda Jordan said. “I look forward to the Overhead Crane training program, where I will gain the necessary knowledge to lead classes for this specific crane category.”

“I am fortunate to have someone such as my dad, Don, to look to for guidance in the industry where he has touched so many lives through his training courses,” she said.

Nominations for the 2013 Top Trainer award can be made online, and will be accepted through August 31, 2013. The first 30 people making nominations will be sent a 2013 Hot Line Crane Guide, which features data on crane models from more than 100 manufacturers. A great historical reference, information dates back to models from the 1950s. The Guide has a $30 retail value.

•Encourage your customers and employees to make nominations.

•Download a paper nomination to include with training handouts distributed during training sessions.

•For individuals involved in Train-the-Trainer programs, consider nominating one of your customers.

•When completing the submission form, upload as much supporting evidence as possible. Suggestions include letters from customers and the trainer’s resume.

•Select the correct category for the nominee. Professional trainers are those employed by training companies or divisions of companies primarily engaged in training. Corporate trainers may conduct in-house training only or may serve customers for the industry, but whose employer is primarily engaged in some other activity, such as manufacturing, distribution, crane rental, etc