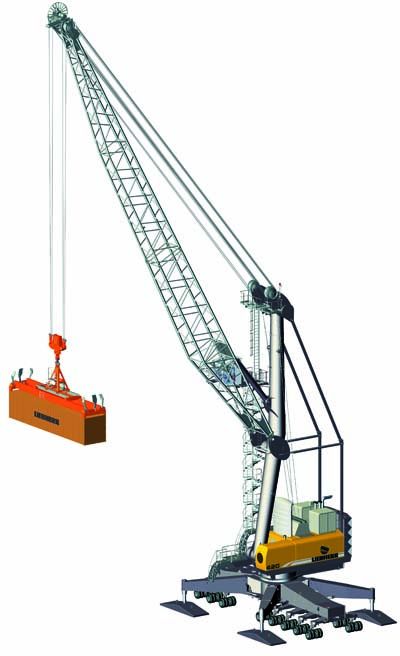 Liebherr has expanded its range of mobile harbour cranes with the new model LHM 420 to be shown at TOC Europe 2011. The new model – which succeeds the LHM 400 and slots between the LHM 550 and LHM 280 – will be available in two variants with maximum lifting capacities of 84 and 124 tonnes.

Maximum radius is 48 meters which Liebherr says, makes the LHM 420 ideal for loading and unloading from a wide variety of vessels, from Handysize to Post-Panamax class. This crane is specially designed for container movement, bulk material, heavy loads and any other cargo handling tasks.

Its undercarriage system is said to give the most manoeuvrable mobile harbour crane in the market and by using a tubular, lightweight tower design corner loads are said to be reduced by 12 percent compared with the LHM 400.

After the LHM 550, which was introduced in 2010, the LHM 420 is the second product line serially equipped with the new Pactronic hybrid drive system. Besides the environmental advantages of hybrid drives, Liebherr says the Pactronic increases handling performance. Hoisting power is doubled resulting in an improved hoisting and lowering with up to 100 percent higher speeds. Based on the reference value of annual turnover a machine equipped with Pactronic handles the same quantity of cargo in 30% less the time.

“To master the years to come, our efforts will not only concentrate on making our cranes more economic and safer, but at the same time, we will implement sustainable concepts and ideas in close collaboration with our business partners to provide the technical solutions for the future,” says Leopold Berthold, director of Mobile Harbour Cranes and Reachstackers.