Liebherr Mobile Harbour Cranes has won the ‘Crane of the Year’ award for the third year running for its LPS 600 model at the annual IBJ Awards in Antwerp, Belgium.

The LHM 500 won the prestigious award in 2010, while Liebherr’s LHM 280 model received the accolade the year prior.

The ‘Crane of the Year’ is decided by a total of sixteen experienced experts in the Maritime Bulk Industry. 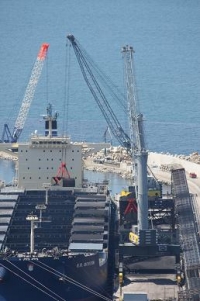 “Winning this prestigious award for the third year in a row marks a huge success and is testament to Liebherr’s consistent commitment to highest quality standards in combination with innovative strength,” said Liebherr.

The LPS 600 is described by the company as “the flagship” of its product line, running on either a diesel or an electric engine (prime mover), or through the combined power of each system with the new Pactronic hybrid drive.

How I Spent My Summer Vacation

What is networking really? And are you doing enough of it?

Q: Who wants to write a book? A: Everyone!