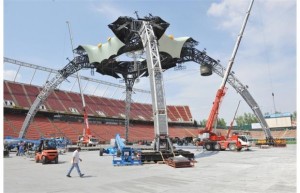 Whatever words you use to describe U2’s 360° stage, just don’t call it small.

On Sunday, a crew of hundreds used cranes, booms and lifts to erect four arched, metal spikes — the skeleton of a light show leviathan that takes four days to build.

Its prongs, levelled with a computer made to build bridges, converge at the structure’s flat top, rivalling the height of Commonwealth Stadium’s nosebleed seats, about 150 feet above the field.

A lit spire atop it all will add yet another 10 feet for Wednesday’s concert.

It took 55 trucks to bring the building blocks of U2’s unparalleled live setup to Edmonton. Soon a second crew will arrive from Winnipeg, where U2 played Sunday night. They’ll bring with them 53 additional trucks, hauling tons of lighting and sound equipment, as well as a 60-ton cylindrical video screen that stretches and hangs from the structure’s underbelly directly above the band.

In all, the setup can support nearly 200 tons and is said to have cost about $30 million.

“Logistically it’s the same that we would do for any stadium tour,” production director Jake Berry told The Journal on the phone from Winnipeg.

“It’s just that we have more of it than anybody else.”

Edmonton is one of the first North American stops on the third leg of the U2 360° Tour, which began in Barcelona in 2009.

Because the claw structure takes so long to assemble, U2 tours with three identical versions. Each of the three stages travels with a team of 33 people, who supervise its construction in a third of the cities on the tour schedule. Edmonton’s stage came from Denver, where the band played the first show of their North American leg on May 21.

There’s one screen to go around. It travels with Berry and the 134-member production team from city to city a step ahead of the band.

In addition to the tour’s sizable travelling crew, local union labourers are brought in by the hundreds to help fill in the gaps.

The International Alliance of Theatrical Stage Employees Local 210 put around 300 workers on the weeklong construction job here in Edmonton. It’s the largest crew the union’s ever committed to a single rock stage. Large shows usually require up to 120 workers. With other concerts in the city over the weekend, including the annual YC Alberta conference at Rexall that featured Christian rock group Switchfoot, the union brought in extra riggers, climbers and machine operators from sister chapters in Calgary and Vancouver to help with the heavy workload.

Union business agent Randy Tomiuk said there has likely never been more members working at one time in Edmonton.

“We’re stretching it but we’re getting it done.”

Before they started building, a day was spent laying aluminum flooring over the field so the machinery and weight of the stage didn’t leave a permanent impression on the Eskimos’ home turf.

Berry said they give their crews four days to set up the stage, so they can take their time and do the job right.

“If we have four days, it’s not really working around the clock,” he says. “It’s a somewhat calm working environment.”

After Wednesday, it all comes down in about half the time it took to build. The Edmonton stage next heads to East Lansing, Michigan, while the band flies to Seattle to play on an identical stage that will already be under construction.