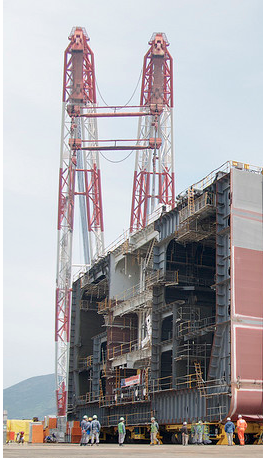 12,481 employees, 64 wheel powered hydraulic jack transporters, 1000 foot floating drydocks plus assorted gantry and tower cranes are some of the most important tools being used by Samsung Heavy Industries Shipyard to build vessels that cost up to $5 billion each! But the most impressive industrial behemoth they own is undoubtedly the 3000 ton double boom sheerleg floating crane used to transport mega-blocks.

What’s a megablock? Well, first a little background on how the world’s largest ships are constructed…

A mega block is one of a set of large components, assembled from bow to stern, that make up a ship. Samsung builds the blocks one sheet of steel at a time through the process of cutting, and welding steel plates together. Once assembled on large concrete parking lots surrounding the shipyard, each block is fitted with pipes, electric cabling, ventilation and the parts required inside the ship’s hull.

At this time the ship is essentially built, but exists in up to 2 dozen separate pieces that need are fitted together like an big-block Lego set. Moving these blocks from land to sea requires hydraulic jack transporters with 64 wheels which scoot under the megablocks and enough hydraulic power to lift thousands of tons. But the blocks still need to be set inside the dry-docks, which will be filled with water to float the ship.

Historically a crane could only carry up to 500 tons to the docks, meaning that smaller blocks would be constructed on land leaving gantry cranes the job of going back and forth in to move countless blocks to the docks to build a single ship. But megablocks, 3,000-ton large blocks at a size that was 5-6 times larger than the previously-used blocks, are more efficient – fewer need to be built for each ship.

To accommodate these mega-blocks Samsung purchased huge machines mounted on enormous barges. Called double boom sheerleg  floating cranes, these jumbo-cranes are among the largest and most powerful in the world capable of lifting up to 3,000 tons of steel.

In the past 90 blocks were required to build a large oil tanker, but by using mega-block technology coupled with sheerleg cranes, only ten megablocks are needed. This has shortened the ship construction period within the drydock from three months to 1.5 months and allows to Samsung to have the highest dock-turnover time in the world. By maximizing technology and utilizing new crane design SHI was able to maximize production volume and reach a record of just over one mega-ship launch per week!

As for the crane that does the lifting. crane has 8 main hooks, each with a 1000T capacity at an 82 meters boom heel. The entire structure is supported on a steel barge that’s maneuvered with the help of powerful tug boats and set in place – with only millimeters of tolerance – by massive anchors spread out like spider-webs from the hull of the barge.

Some operations, however, are too large and complicated for the human brain to comprehend by words alone. For those times when we need to understand the seemingly impossible, video is the only way to go. The following is video of a mega sheerleg crane in action setting a 10 story steel accommodations megablock on top of a brand new $750 million dollar, 750 ft long, 137 ft deep offshore drillship. The video was taken using time-lapse photography but the overall operation – from lifting the megabuck from land to setting it precisely (within millimeters of accuracy) in place – takes only about 6 hours to complete.

﻿﻿﻿To view video of actual lift click on source link.