One of the biggest building projects in Europe is currently employing nine Liebherr tower cranes in a crowded, highly dense area. On the new Karolinska Solna University Hospital, four more tower cranes will be delivered over the next 12 months.

Construction of the hospital in Stockholm, Sweden, is the world’s largest public private partnership hospital and Sweden’s first PPP building. It is also general contractor Skanska’s largest project. The facility will be an ultra-modern hospital designed for specialized healthcare, research, and education that works in close collaboration with the Karolinska Institute and the medical university, as well as other universities and life science industry in Sweden and abroad.

When looking at replacing the present hospital, it was considered more cost effective to construct a new hospital alongside the current premises than to renovate and refurbish the existing facilities, which include 40 buildings that dated back as far as the 1930s. Building a new hospital was also considered better in facilitating a new approach to healthcare, implementing modern ideas and practises.

The new project is being developed by a consortium comprising Skanska and UK investment fund Innisfree. Under the agreement Skanska and Innisfree will be responsible for financing, construction, operation and maintenance of the new hospital until 2040. The construction contract amounts to US$1.8 billion, and Skanska is investing US$84.7 million.

Construction started in 2011 with the first Liebherr crane erected in March. With construction spread over six phases, completion is anticipated by 2017, with the final crane being dismantled in 2015.

The nine Liebherr tower cranes are currently installed on the 320,000 m2 gross area, with seven erected in virtually a third of the site in a ‘very crowded’, high density operation.

“As a result of this, we are extremely aware of the importance of safety with this high density of cranes,” said Richard Eriksson, Skanska’s crane and hoists operations manager. “With some of the jibs just 2.5 m apart it is essential that there is no overlap at any time on this very ‘crowded’ site.” As a result, great emphasis has been placed on the application of the French anti-collision specialist Ascorell Systems—fitted to every crane—together with Liebherr’s ABB system identifying dead zones.

Specified as a ‘green’ site, with the contractor anticipating LEED Gold Certification, Richard Eriksson confirmed that the client specified the use of Liebherr’s Litronic models. “They specified a preference for Litronic models to be erected, together with frequency converters to achieve the lowest power demands,” he confirmed.

The Liebherr Litronic system ensures that the maximum load can be increased by 20 percent at the simple push of a button. The control system comprises several electronic functional modules including the LBM load momenting system, the ABB work area limiting system, and the MBA machine analysis system – all fitted as standard. 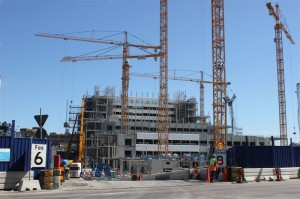 On the project, six new towers ranging in height from six to fifteen storeys are being built, including a technology building, parking garage, hospital phase 1, hospital phase 2, research laboratory, and patient hotel and parking. Construction techniques across the site features pre-cast panels including walls, slabs, bathroom units and facade elements all cast at Skanska’s fabrication factory. All will be lifted and positioned by the Liebherr cranes.

The Liebherr dealer, E.D.Knutsen was to work closely with Skanska during consultations relating to the foundation systems and providing drawings to eliminate the possibility of collisions as well as drawings for foundations embedding the crane foundation anchors. “They became an important partner during these calculations,” said Eriksson, “In finalising the foundation configurations with just three cranes installed on cross frames and the remainder sitting on foundations.” Three cranes are rail mounted on 30 to 40 m long rails.

Following the start of construction, it was decided to lift and turn one of the rail-mounted 630 EC-H cranes. Using hydraulic jacks and in an operation lasting five days, it is thought to be the first time this procedure has been carried out in Sweden.

“We worked very closely with Liebherr and E.D. Knutsen and during the procedure, I think it fair to say, we were all a little nervous but it worked very well without having to dismantle the crane,” said Eriksson.

As a further concern for the crane operators, the site is below the flight path to the old hospital’s heliport with helicopters flying just 20 m above the 100 m high Liebherr cranes, ensuring that crane heights cannot be increased under any circumstances.

At the peak of construction, Skanska anticipate that at least 30 mobile cranes will also be employed on the site—with the majority being Liebherr mobile cranes. They will be in constant demand unloading the nonstop supply of the pre-cast elements from the delivery trucks; with deliveries to site every 40 seconds and trucks adhering to strict ‘spot’ delivery times. A number of Liebherr crawler cranes are also on site.

The scheme was developed in just 15 months, from concept to signing the agreement – also considered a new world record for a PPP project. Architect for the project is Tengbom Architects working on a design concept created by White Architects. The main award was made by Stockholm City Council.

The new hospital will incorporate 7000 rooms and include 600-beds for patient care and a 100-bed patient hotel, 36 operating rooms and 8 radiation rooms.