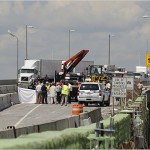 More details have came in regarding the death of  William Barnes. He was doing electrical work on Throgs Neck Bridge, which connects the Bronx and Queens in NYC, when a cable broke on a crane pinning him against the truck. The police said Mr. Barnes “was removed from beneath the boom of a crane after the cable snapped, pinning him against the vehicle.”