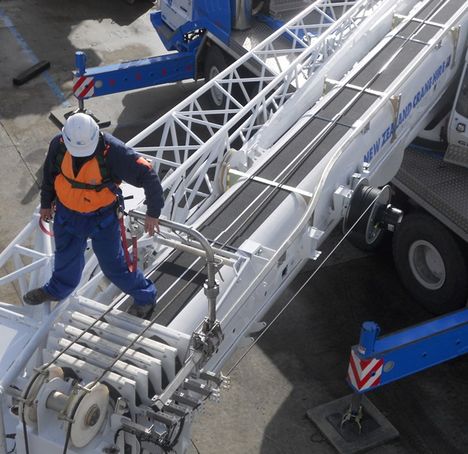 NZ Crane managing director Deane Manley said: “It has been standard industry practice for years to climb on top of booms without adequate fall protection, but this has just got to stop. It is clearly hazardous but no one seemed to know of a better way before. At four metres above the ground, a fall from that height is enough to kill someone. When we found out about TRAM it was clear that ignorance was no longer an excuse.”

Most of the cranes involved are Grove, the first two of which are the GMK 5170 and a GMK 4100. A further 10 units are now being fitted.

The TRAM unit enables users to walk on top of the crane boom without the risk of falling. The user has a double lanyard that clips onto a moveable handlebar at waist height. The handle is fixed at foot level to a rail along the length of the boom. By tying off at waist level rather than foot level, TRAM users have no distance to fall in the event of a slip or trip, and still have total freedom to do their work.

The handle, or arm, rotates 180 degrees to aid manoeuvrability and to allow the arm to fold down for storage when not in use. As the user climbs up the side of the crane, they clip the lanyard onto the arm. Squeezing the hand brake releases an air-powered spring that pushes the arm gently but firmly to vertical, helping the user climb up and over onto the top of the boom. Similar assistance is given in descent.

A deadman’s brake prevents the arm moving along the rail unless the hand brake is squeezed. 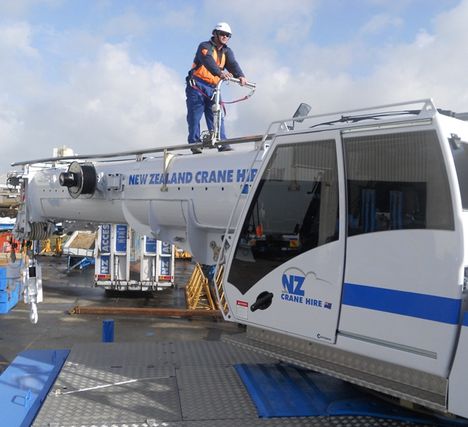 TRAM Australia Pacific worked closely with Grove distributor Tidd Ross Todd and NZ Crane on the first units to produce a methodology for fixing the rail to the booms. The precise method can vary for each crane type, depending on such diverse features as the location of rope retainers and angle of tilt of the cab.

Previous TRAM installations have seen the rail welded or banded on the boom. TRT engineering director Robert Carden proposed a chemical bonding solution instead, where the brackets that hold the rail are bonded to the boom by pressure injecting an epoxy resin into the joint.

Carden explains: “We have used this method for the past six years to bond the fibreglass insert into our steel booms for live-line aerial platforms. We have also used it to bond the trailing boom trailer mast mounts under the boom of a GMK 4100 and GMK 5130-1.”

TRAM Australia Pacific director Martin Jones designed a bracket that forms to the contour of the boom and laps over each side at the top, to resist shear forces. “Grove has been very helpful in supplying me with drawings of their boom profiles,” he says. “This allowed me to manufacture brackets more easily knowing that they fit perfectly.”

The bonding process has been designed and tested to AS/NZS 1891.4: 2009 Industrial Fall Arrest Systems and Devices – Selection Use and Maintenance, and certified to equivalent international standards.

While welding and strapping have both worked perfectly well on other installations, Jones believes that bonding has the benefit of looking very neat. The requirement for overnight curing adds to the installation time and there was an additional cost to the first two units simply because they were the first, but costs are expected to reduce rapidly.

Manley says the benefits of TRAM go beyond knowing that his workers are more likely to get home alive, there are also commercial rewards. It helps to position the company as likely supplier of choice for any customer that takes safety seriously. And it has been a key component of a safety programme that has secured a 20 percent discount on insurance premiums for the country’s mandatory Accident Compensation Corporation scheme.

“It’s a no brainer,” Manley concludes. “The only reason why you wouldn’t fit TRAM is because you are too miserable.”