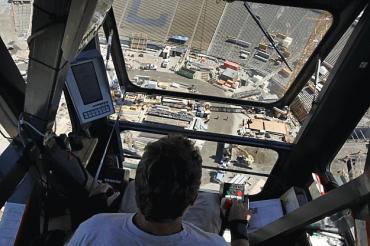 Hand over hand, one rung at a time, a visitor arrives panting and pouring sweat at the office of Kirk Luba, 180 feet above terra firma. It’s the catbird seat of a Liebherr 316, one of four giant tower cranes doing the heavy lifting on the Memorial Stadium project.

Luba, a tower crane foreman, had invited a Chronicle reporter, and later a photographer, to come on up for a look-see at life above it all.

“I like unique jobs,” said Luba, 51, of  Half Moon Bay and a crane operator since 1980. “I worked on the Bay Bridge for three years. You can’t just space out and have a brain fart. You have to focus. Right now it’s quiet. There’s no wind, there’s no fog, there’s no rain. Weather plays a big part in this.”

The weather was spectacular on a recent day when Luba was paid a visit for a bird’s eye view. From his chair, Luba operated controls on either armrest as loads of scaffolding were lowered into place with precision.

Luba is one of four tower crane operators at Memorial Stadium, along with Carlos Tovar, Ben Alexander and George Dean, forming a quartet of conductors skillfully maneuvering supplies so that neither their jibs (horizontal arms) nor their vertical lines hit each other.

It makes for a slow-motion display of synchronization writ large on the work unfolding below. Luba’s crane on the west side of the stadium is being put to work on the foundation of the six-level press box structure. Sometime in October these giant cranes will be disassembled and removed and replaced by a mobile 210-foot crane moving along a track. That crane, in turn, will be replaced by an even bigger crane that will lift the completed press box into place in a series of five segments – a must-see event, that.

Luba leaves his home at 5 a.m. to be in Berkeley in time to punch in and climb the ladder to his work station. While his Chronicle visitor took a good 15 minutes to reach the top, Luba does it in little more than five, slightly longer if it’s raining and the metal rungs of the ladder are slippery.

“It’s not for everybody,” Luba said. “You sit in the box for 10 hours a day. It’s pretty sedentary. Not everyone is comfortable with heights.”

Luba does not descend at any point during his shift, meaning he takes everything he needs with him: lunchbox, water bottle, wireless reading device and a plastic jug for when nature calls.

For his lunch break at noon, Luba took his visitor through a hatch in the top of the booth out onto the rear arm of the crane, where the panorama from Albany to the north, the San Francisco skyline to the west and the sprawl of the Oakland flatlands to the south was unobstructed.

It was just another day on the job for Luba but for his visitor, a rare opportunity to feel above it all.