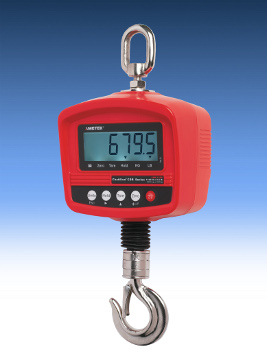 Designed for general purpose weighing, the CDR Series is available in five capacities and has a measuring accuracy better than 0.2 percent full scale. Powered with a rechargeable battery, the scale incorporates a rugged housing and a backlit LCD display that indicates measured values in pounds or kilograms. The scale’s remote control, which operates up to 100 feet, allows users to change units, clear measurements, zero and tare out weight, and capture peak weight.

Targeted at high-capacity applications such as warehouse operations, the CMA Series is a precision weighing solution available in six capacities from 1,320 pounds to 22,000 pounds. The scale provides measurement accuracy of better than 0.2 percent full scale. The CMA Series offers a cast aluminum housing, an LED display that indicates measured values in pounds and kilograms, and a rechargeable battery pack that can operate up to 100 hours continuously. The scale, which offers hanging loop, S-hook and multiple international power configurations, operates using push-button style keys or an optional wireless remote controller.

The CTR Series is a high-capacity precision weighing solution that includes a precision weighing sensor and a wireless remote controller/indicator. The CTR scale, which offers a measuring accuracy of better than 0.2 percent full scale, is available in three capacities from 6,600 pounds to 66,000 pounds. Powered with a rechargeable battery pack, the scale can display the peak weight with a manual hold key. Each scale is equipped with a hanging loop, S-hook, remote indicator/controller and a Certificate of Conformance.