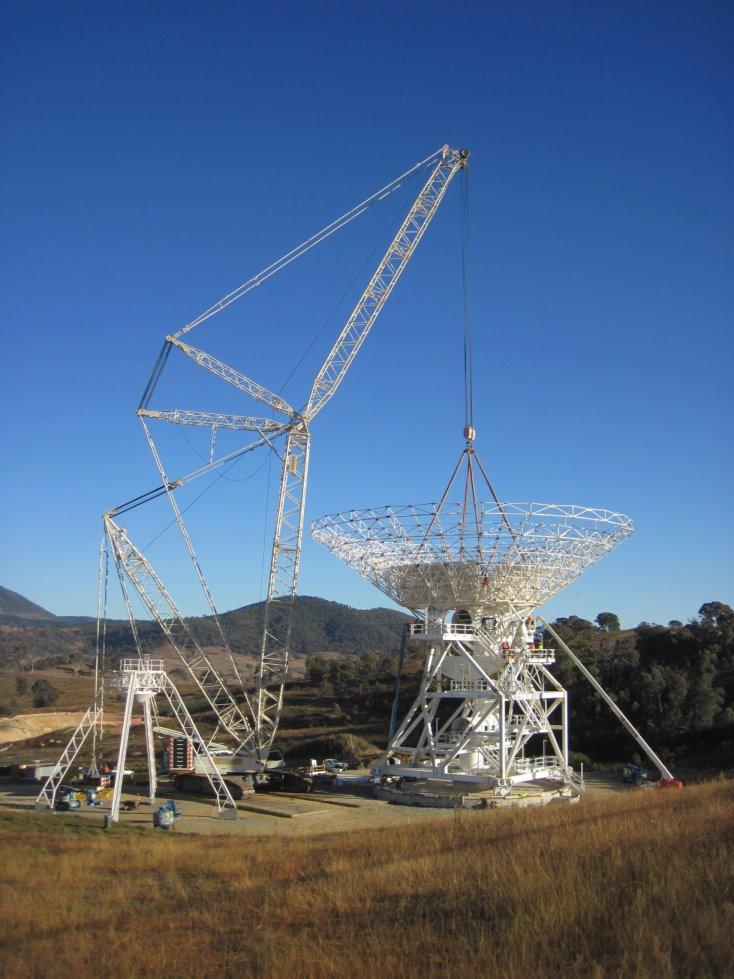 The 34 metre diameter Deep Space Station 35 (DSS35) is a Beam Wave Guide (BWG) antenna which took three years and Au$ 50 million to build. It will be fully operational late 2014 in time to track the U.S. National Aeronautics and Space Administration’s (NASA) New Horizons mission before the spacecraft reaches Pluto. The NASA facility is located in a natural reserve area at Tidbinbilla, 35kms southwest of Canberra and is managed by the Australian Commonwealth Scientific and Industrial Research Organisation (CSIRO).

When the project is completed, the complex will be the main signal base for NASA’s deep space missions. The Canberra station is one of the three sites around the globe making up the Deep Space Network – the other two are based in California and Spain – ensuring there is always one station in the field of view of every spacecraft.

Universal Cranes mobilized its Terex CC 2800-1 crawler crane – one of the most popular crawler cranes of its capacity in the world – for the lift rigged with a 36 m main boom and a 36 m luffing fly jib. This configuration allowed Universal Cranes to erect the satellite dish as a single unit with all of its structure installed. This meant both cost and programme savings for principal contractor General Dynamics SATCOM.

Total load to be lifted was 126.5 t which included 114 t of the satellite dish, a 160 t capacity hook and cheek plates and about five tonnes of slings and shackles. The clearance between the crane’s main boom and the dish was very tight, and this was one of the most challenging aspects of the lift.

“Because of the compact site and the fact that the construction on the antenna was already underway, we had to develop our lift program to suit,” said Nick Morris, Universal Cranes heavy lift engineer. “This crane specification was chosen because it allowed the antenna to be erected in a single piece.”

When erecting the previous antenna, the client used a Terex CC 2800-1crawler crane in a main boom only configuration; this meant that one bay out of the dish structure had to be removed. “The option we provided allowed the site to carry out more assembly and fabrication works closer to the ground which was a major safety factor,” he explained. “The crane was fully built on site at the site pad and did need some careful planning due to narrow access roads. But overall, the whole project went very smoothly.”

The lift was carried out early in the morning in perfect conditions. It involved the Terex CC 2800-1 crawler crane picking up the dish at a radius of 26 m, and then crawling under full load a short distance before slewing 300 degrees and placing the dish on top of a pedestal structure. Without the crane moving from its final position, it then carried out a second lift placing the upper quadripod antenna structure, at the center of the dish. The total height of the antenna when in its ‘stow’ position is 35 metres.

Prior to the lift, Universal Cranes carried out extensive ground load tests including a heavier test lift designed to exert increased crawler track loads to ensure there would be no problems during the actual lift.

About the Beam Wave Guide antenna

The Beam Wave Guide antenna design has its transmission and receiving equipment located in an underground structure 10 metres below that forms the base pedestal on top of which the main antenna structure and dish are supported.

The pedestal design is already used in one of the current 34 metre antennas (DSS34) currently located at CDSCC and allows for easier and safer access to the antennas electronic systems which would otherwise be inside the antenna structure.

When complete, DSS35 joins a 40 year old, 70 metre dish and two other 34 metre dishes at NASA’s only southern hemisphere communication center. The communication center communicates with robotic spacecraft by sending commands to turn on experiments and then receives the data from the spacecraft with a signal equivalent to 1/20 billionth of a watt. The complex is set to grow in importance in the future because over the next 10-15 years the planets align in such a way that the Southern Hemisphere will have the best overall view of the existing spacecraft spread out across the Solar System.

The new BWG technology offers greater flexibility and accuracy communicating across a higher range of frequencies than the aging 70 metre dish which is said to be well past its 25 year design life. It takes four of the new BWG antennae to replace the capability of the larger 70 metre dish.

The latest antenna (DSS35) will expand the capabilities of the CDSCC by providing an additional antenna aperture to support the New Horizons mission as well as the planned and expected growth in deep space missions being launched over the next decade.

The CC 2800-1 offers a maximum 660-ton (600-tonne) lift capacity at a 32.8-ft (10-m) radius and excellent lifting capacities throughout its entire working range. Its variable superlift radius increases lifting capacities at further distances away from the crane’s base. A variety of boom configurations, including extensions, luffing jib, windmill kit, and vessel lift as well as many other modules are available to increase crane versatility.

Transportability is improved due to the CC 2800-1’s unique open-boom design. These rectangular sections do not sit as high on the trailer as competitive boom designs, and no internal cross bracing allows smaller boom sections to be nested inside of larger sections to reduce the number of trailers required for transport. The CC 2800-1 can be equipped with the exclusive Terex Fall Protection System, winner of the 2012 ESTA Safety award, which advances safety when rigging boom sections.