Lunchtime diners had an amazing escape when a huge crane smashed through the roof of a McDonald’s restaurant Friday. (FRI) The mobile crane was delivering an outdoor chiller unit to the fast-food restaurant in Genesis Way, Consett, County Durham, when it toppled over at about 1pm. 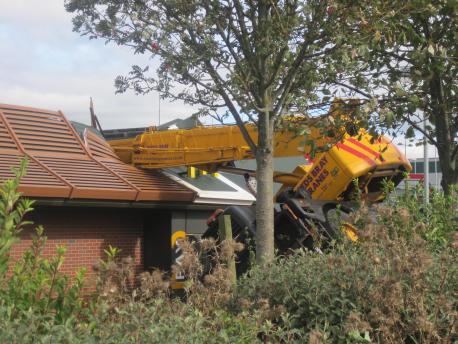 Miraculously, no one was injured in the accident despite the restaurant being full of shocked customers and staff.

A McDonald’s spokesperson said: “This afternoon a crane has caused damage to the roof of our Consett restaurant.

The crane had been on site to carry out scheduled development work and toppled while moving an outdoor chiller unit.

“Thankfully nobody was injured. The safety of our customers and employees is our top priority and the restaurant will remain closed while the damage is fully assessed.”

Joanne Wardell, control room supervisor for Durham Police, confirmed there had been no injuries.  She said: “No one was hurt. We have been to the scene and established there was nothing for us to do.”

A spokesman for Reeds Bray Cranes, the crane operator, declined to comment when contacted today.