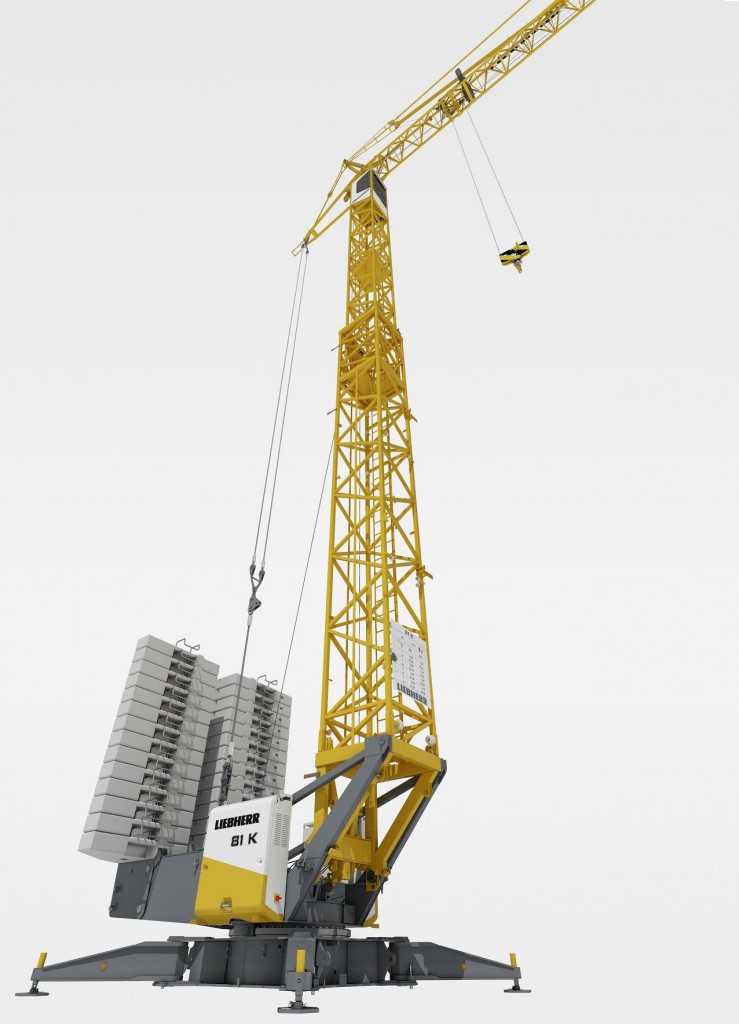 Liebherr is introducing the 81 K at the 2010 ‘Bauma’ trade fair, a brand-new fast-erecting crane of entirely new design, with the highest levels of performance. The 81 K sets new technological standards in its class, with many ingenious technical and visual features.

Versatility in a wide range of applications and rapid availability were requirements that the previous 71 K model already satisfied. With more than a thousand sold, demand for this crane was stronger than for any of its rivals in this market segment. The new Liebherr 81 K is based on this successful concept, but with a large number of further developed and optimised functions.

Compared with its predecessor, the 81 K has a distinctly improved load characteristic and can lift loads more than 25 % higher at the end of the jib. The user benefits of this mature design are also evident in its ease of control, the straightforward erecting procedure and the exceptional versatility.

The 81 K is the first crane in its class to operate only in the double-reeved mode – an absolutely new development that defines a new performance standard in this market segment.

Since all the loads can be lifted in the double-reeved mode, the time-wasting process of re-reeving is no longer needed. Economical operation over an optimal range of loads and speeds is thus assured. The 81 K can be operated at the maximum possible speed and lift the maximum possible load, but can also run at high speeds when there is no load on the hook.

The new 81 K differs very little from the previous 71 K in its transport dimensions. In the transport mode, it is exceptionally compact and manoeuvrable. Liebherr’s well-proven transport axles can be used to move this fast-erecting crane from one operating site to the next. Like all the other models in this series, it has been granted a German General Operating Permit (ABE).

The 81 K can be manoeuvred without difficulty on to extremely restricted spaces on the construction site. The design of the superstructure allows the crane to be erected very close to buildings. The slewing radius has been optimised, and is now only 2.75 metres. Since the tower sections, which are of climbing pattern, are only 2.4 m long they can be carried sideways on a truck.

The 81 K uses an exceptionally simple, safe erecting procedure. The tower is raised and telescoped out with a single continuous erecting rope. The erecting process is supported by semi-automatic quick-connection locking between the tower and the slewing platform, and by jib guying rods. Separate hoisting and erecting winches are another feature that simplifies crane erecting work.

For efficient ballasting, there is a semi-automatic ballasting system with centralising against the locating stops. Pairs of ballast slabs can be secured together by threaded couplings, so that only eight lifting movements are needed to install the ballast and make the crane ready for operation.

Scaling is greatly simplified and speeded up by the new graphic display. During crane operation, complete status information is shown in clearly laid-out form on the display, using pictograms.

With eleven variable hook heights, the 81 K is an extremely adaptable crane. As well as the standard 26.0 m hook height, various configurations are possible without using the climbing facility to insert additional tower sections: four additional intermediate hook heights, a 30-degree steep angle jib position and a 45-degree angle to keep the jib clear of obstructions. If further tower sections are inserted with the climbing mechanism, six more hook heights up to more than 40 m are available with the jib horizontal. This too is an unrivalled feature in this crane category. The tower sections are fully compatible with the previous model, and those from the 71 K can be installed on the new crane with no restrictions.

The 81 K sets a new standard for bottom-slewing cranes by its use of driveline and control-system technology previously found only on top-slewing cranes.

Safe, efficient load handling is assured by continuously variable drives developed by Liebherr’s own driveline technology competence centre. All drive assemblies on the 81 K are continuously variable, using the frequency control principle. To ensure accurate movement of every load, the range of control lever movement always corresponds to the maximum possible speed.

The pushbutton-selected fine positioning mode reduces rope speed to 25 %, so that even heavy loads can be positioned absolutely accurately without the hoist gear brake being applied.

Electronic load moment limiting (LMB) also helps to make load movements absolutely safe. It warns the crane operator in good time if the load limit is approached. Thanks to LMB, the new 81 K can be operated unrestrictedly into the limit zone.

The optional Teleservice function is used to transmit the data recorded by MDE to the Liebherr service point. Data recording covers all drive assemblies with operating relevance, load handling cycles and troubleshooting or warning messages. By means of a remote data link, worldwide communication is possible between the crane and the Service point. Liebherr has provided the Teleservice function for construction cranes with great success for more than ten years now.