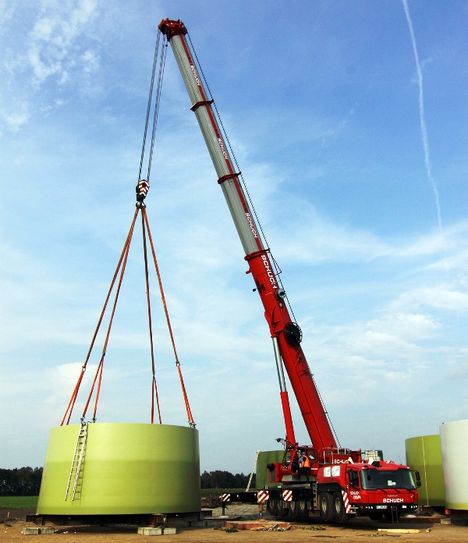 German rental company Schuch is using Grove’s first new 300 tonne GMK6300L All Terrain crane to erect the tower sections of a 2.5 MW Enercon E82 wind turbine in Mensinghausen, near Hannover. To lift the tower sections, the GMK6300L was working with 31.5 metres main boom and its maximum counterweight of 92.5 tonnes. In this configuration, the crane was able to lift 74 tonne loads and place them at a radius of 11.2 metres. The GMK6300L has a full seven section main boom of 80 metres and includes Twin-Lock pinning and Manitowoc’s patented Megaform design for optimized rigidity and capacity.

For further reach, a 37 metre jib is available. Maximum available length is 117 metres with 2 tonnes. A heavy-duty jib with a capacity of 38 tonnes is also available.

Winnie Backer, Schuch’s crane operator said that he liked its strength and movement.

“We chose it because it’s very strong and we knew with the Megatrak suspension it would be easy to move on the rough ground. Another feature is the crane’s availability to rig its own counterweight, which saved the need for an auxiliary crane and made things faster and less costly for our client. In addition, we were able to drive the crane on the job site with the full counterweight attached.”

The crane working in Mensinghausen is as part of Manitowoc’s pre production program, in which cranes are closely monitored and their performance assessed by Manitowoc’s engineering team.

Ship crane looks after the trees