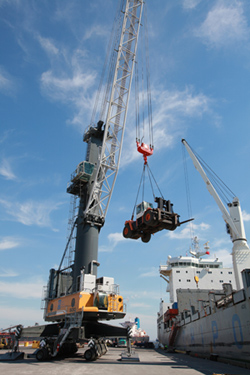 A trend for larger ships at a time when demand for sustainable, environmentally sensitive operation and the call for low-emission cargo handling equipment is growing, says crane manufacturer Liebherr-Werk Nenzing.

Its mobile harbour crane (MHC) department is beginning to sense increasingly positive signs from the industry that give reason to believe the economic crisis is in the past, says the company.

The demand for environmental operation has led to the development of the Liebherr Pactronic, introduced into the market in 2010. This new hybrid drive addresses two critical issues to reduce fuel/power consumption while increasing handling performance. Pactronic was introduced to the market on the new LHM 550. Serial production started in October 2010. So far there are already more than 10 machines on order.

Liebherr-Werk Nenzing GmbH, Nenzing, Austria is the largest maritime crane production site and head of the divisional controlling company, the Liebherr-MCCtec GmbH, which is responsible for the Liebherr range of maritime cranes.

Climbing as it should be done