Knuckle booms and mobile cranes stand out at SAIE 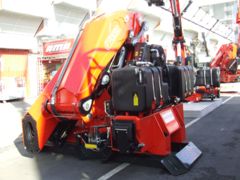 The lack of any tower crane manufacturers at what was meant to be SAIE’s bi-annual tower crane year was a sign of the difficult economic conditions that still exist in Italy. Major manufacturers like Liebherr and Terex chose not to attend October’s annual exhibition held in Bologna, Italy either, although the latter was represented by a distributor. As a result, the usually bustling outermost halls and outside areas were notably emptier.  SAIE organisers said, however, the show had seen 1% more professional visitors than the 2009 exhibition, with the figure standing at 168,000. Some 6,800 of these visitors came from outside Italy, said the show’s press office. In total there were 1,500 exhibitors, 302 of them being from outside the country.