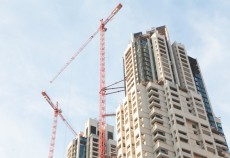 Wolffkran’s tie system, seen on an Al-Futtaim Carillion project in Downtown Dubai. The tallest crane topped out at 203m.

Tower cranes an integral part of any major construction site, and new models and market options can bring improvements and efficiencies to any building job.

While in Dubai there remain significant numbers of tower cranes standing idle on halted projects, overall the anticipated levels of construction in the GCC, in major cities such Abu Dhabi, Riyadh, Jeddah and Doha, indicates that manufacturers and service providers should see steady demand in the medium- and long-term.

With social and demographic pressures in the Middle East in full focus, construction of infrastructure, including hospitals, school, medium density housing, airports and roads is often prioritised over the tall vanity towers.

One impact for the tower crane industry is that pre-cast concrete is a popular choice for these projects. And as pre-cast has become more common globally, tower cranes have increased in size.

Thilo Stark, marketing and market management at Liebherr-Werk Biberach, says that in general, weight classes are getting higher because more and more prefabricated elements are being used in construction.

With a strong fleet of towers in the Middle East, Stark says that well-utilised Liebherr cranes in the region include the 280 EC-H tower cranes with 12 tonne max capacity, the 160 HC-L luffing jib crane (16 tonne max capacity), as well as the large HC cranes, with a lift weight extending up to 50 tonnes.

Thibaut Le Besnerais, global product direct tower cranes at Manitowoc, sees a trend in the projects underway in less-developed markets that is driving the shift to larger cranes.

“At the moment we are seeing a shift towards bigger cranes. The slower demand in traditional markets, combined with the growing demand for infrastructure work in emerging countries and economies, are driving this.”

In the GCC, Wolffkran’s 8033cross has proven to be a popular model since its release in 2010, effective on job sites with heavy concrete pre-cast elements, with a max lift of 20t and a maximum jib radius of 80m. As many as 60 of the 8033cross machines are in use at the development of the new Jeddah airport.

At last year’s bauma China exhibition in Shanghai, there was no escaping the impression that flat top cranes were everywhere. Easier to transport and assemble, and with closer working distances, it is not hard to see their attractions.

If there is one company that can be counted on to put forward the advantages of flat tops it is Linden Comansa, since it is the company’s entire production range.

“They are easier and faster to erect and dismantle, plus there is less interference when cranes are overflying. Utilising topless cranes can offer significant cost savings on jobs where multiple cranes are needed.”

While some companies are building large capacity flat tops, for others there are recognised size limitations. Stark says that Liebherr reckons with limitations beyond 400 tonne metres.

Wolffkran global product manager Gerd Tiedtke says that the company’s philosophy is to build its clear lines cranes (flat tops) for small and medium load moments, and then jump to its cross line cranes for larger load moments. Clear lines are fine up to roughly 250 mt’s, says Tiedtke, but beyond this the better solution is the ordinary design with braced jib.

“Theoretically” Wolffkran could build a flat top up to 600 mt, he notes, but believes it is inefficient to do so, because of the heavy weight of steel that would be required in the jib required for strengthening.

Additionally, the size of such reinforced jib sections would not allow for easy containerisation for transporting to overseas markets such as the GCC.

Indeed, some of the largest flat-top sections on the biggest cranes need to be transported in open containers.

A trend in Europe, which is not yet evident in the Middle East, is the use of self-erecting tower cranes for a wide variety of jobs.

Typically, these models appealed to smaller contractors, working on houses and residential projects with a handful of works. But beyond these, self erecting cranes can now be observed in widespread use, particularly in northern Europe, on road and other infrastructure projects.

Last year at Intermat, Terex Cranes launched the Eazy 90, a self-erecting tower crane with a max lift of 6 tonnes, and 1.4 tonnes at the extreme of its 45 metre jib. Cosmo says that the strong and improved capacities of this product class, with up to 50 metre tonnes, and with jib lengths available up to 50 metres, is partly to explain their popularity.

But part of their growth is also due to the preference of rental companies, who can move the cranes quickly between job sites, he believes.

“They are fast and easy to erect, and offer great ergonomics and versatility. The powerful yet soft mechanisms mean they have great capacity and close control, while the telescoping process is simple and makes it easier to set the crane at different working heights.”

Yet here in the Middle East, self erecting cranes are not a common sight. David Semple, Manitowoc’s VP of sales for Middle East and Africa, says that the low cost of labour means that manpower, and perhaps the occasional hired mobile crane, are used where in developed markets smaller contractors would deploy equipment on a permanent basis to keep labour costs low.

In the Middle East, beyond the smaller projects where self-erectors can be used, there is a jump to heavier lifts, eight to 12 tonnes, reflecting the use of pre-cast panels and segments says Semple, far above the capabilities of self-erectors.

But self-erectors are finding some use in niche applications, particularly on power plants and in the petrochemical industries, where the cranes can be used to avoid obstacles such as pipe racks and heavy metal structures.

A smaller footprint and precision are also attractive in these environments, and a self-erector can stay several years in the same place whereas in Europe they are moved far more frequently.

Self-erectors are also seeing some utilisation in housing projects in Oman and Saudi Arabia, but often after being sourced second hand from Europe, – “something which doesn’t really help us as a manufacturer,” notes Semple.

Beyond weight class and crane type, many of the improvements in recent years have included design upgrades as well as specific project engineering. Whether it is faster winch times, luffing speeds or an easier set up, contractors stand to benefit.

The Potain MDT 248 is designed for flexibility in the assembly process, and offers two options for rigging its top section.

For Wolffkran, Tiedtke says the companies products have a number of design features that make assembly of the crane easier, including pre-reeved pulley block for the luffing drive, and a pre-reeved system to help the crane erectors bring in the rope system for the hoist drive, especially for its larger cranes.

Furthermore, the patented A-frame layout, including lighter-weight beams, means that the cranes can be erected using smaller mobile cranes.

Another development for Wolffkran is its serial tie system, on which it began work in the early 2000s. The ties can be connected to the universal frame from all angles, which allows greater flexibility for users, and is far safer than the many DIY solutions used in the past, says Tiedtke.

One example seen recently by PMV is at Emaar Properties’ Burj Plots in Downtown Dubai, where the ties where used by Al-Futtaim Carillion (AFC) on the three final tower cranes remaining. The highest crane topped out at 203 metres, a record for AFC in the GCC.

Safety will also continue to be at the fore, especially with tower cranes operating on tight sites within cities, says Cosmo, where any accident can have alarming consequences for those below.

In emerging markets, particularly India, he says the Terex tower cranes are seeing more use, replacing the use of labourers carrying material up tall buildings, with improved workplace safety implications.

Cosmo says that as a crane manufacturer, Terex provides service as well as design, involving application engineers and special cranes. From a project standpoint, this requires them to study the layout and specific requests.

“The shape of buildings is becoming very complicated, and this requires huge support behind it, not only sending a crane.”

Examples in the UK include The Shard and the Walkie Talkie, says Agustin Dominguez, marketing, Terex Cranes.

“When you have a complex building, it will be a custom-standard solution – it is based on a standard product, but then you have to develop a special application related to the product.”

In the case of London’s Shard, the tie system had to be custom made, says Dominguez. For the top crane, the base was not in the ground, but in a specially-designed cantilevered frame.

On the Walkie Talkie the special application utilised by three Terex luffers was an internal climbing system, with the ordinary system adapted to the specific building.

Contractors in India are using tower cranes on smaller job sites, where previously they had relied on other aerial options, said Raymond Tang, Manitowoc regional product manager for tower cranes.

“While the use of tower cranes on high-rise buildings is common across India, smaller buildings have generally relied on other options for material handling,” said Tang.“But that mindset is changing as awareness among contractors is growing of the improved productivity tower cranes offer.”

His comments came as Manitowoc launched its new Potain MCi 48 C tower crane, built at its factory in Pune. With a maximum capacity of 2.5 tonnes, or 1t out to its maximum jib end of 36m, the new crane is targeting mid-level construction jobs on the sub-continent.

“Our new Potain MCi 48 C is designed for multi-story buildings of between 8 and 15 stories or developments spread over wide areas,” explained Tang.

Perhaps the most-visited – and most-photographed – construction site in the world is the area around the Holy Mosque in Makkah.

Wolffkran has a well-known association with the project, through their local partner Roots Group Arabia, which has supplied numerous cranes to the project. The Jeddah airport is also another major SBG project where Wolffkran cranes are playing a very visible role.

However while designs have improved, Echevarría believes that Chinese manufacturer behind when it comes to electrical components and mechanisms, and that service and aftersales support remains weak.

Nevertheless, in markets where the upfront purchase price is often the major consideration, Chinese manufacturers are making inroads.

“Chinese tower cranes manufacturers are already making an important impact in Middle East and in BRIC countries, and even a small impact in Europe.”

And while European manufacturers are constantly improving their products, the difference in price between European and Chinese products is reducing due to the rising costs in China and due to the prices in Europe, which are maintained (or even cheaper) due to the crisis, says Echevarría.

Goals Revisited. Met and Unmet. Why You Don’t. And What To Do!