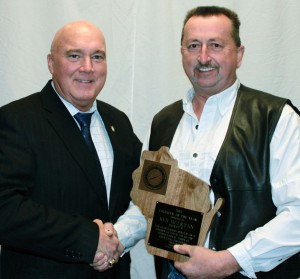 Engineer of the Year,
Ken Mulryan

Dawes Rigging & Crane Rental Inc. of Wisconsin reports that operator Ken Mulryan has been appointed Engineer of the Year by the International Union of Operating Engineers Local 139, District D. Mulryan works out of Dawes’ Milwaukee branch.

The Engineer of the Year honor is bestowed annually to exemplary members whose conduct and involvement in Local 139 and the communities in which they live define what it means to be a “good union member.” Their peers within the union award members this distinction. The union’s leadership then salutes them with a personalized plaque presented before the membership at an official union function. Their names are subsequently added to permanent honor roll wall hangings throughout the various district halls.

Mulryan first joined the Local 139 in 1986 when starting out as a crane operator and, over time, has become known for his mentoring activities. According to Dave Backman, who heads the communications department of the Local 139, “Ken is highly regarded among the union’s rank and file as someone who will always help younger members learn the craft of proper crane operation in order to advance their careers. He regularly answers questions about the work they do and the equipment they operate.”

Mulryan has loved his career as a crane operator. “I’ve been in the business for 28 years,” he said. “I really enjoy my work, and I try to share that enthusiasm with members who are just starting out. They need to take their time and get it right the first time. It’s a worthwhile challenge.”