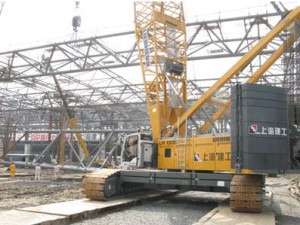 The LR 1300 is assigned to the Beijing to ShanghaiJingHu high speed railway Hongqiao terminal, while the LR 1750 is working on the first section of the Hongqiao Transportation Hub Quick Distribution System Engineering project.

The 750 tonne capacity LR 1750 has a 49 m boom and belongs to private crane rental specialist Shanghai Pu Gao Machinery Construction Co Ltd, which took delivery of the crane in 2008.

The 300 tonne capacity LR 1300, with a 42 m boom, was delivered this year to Shanghai Mechanized Construction Company, a key client of Liebherr Werk Nenzing GmbH, said the manufacturer.  The LR 1750’s primary duty on its project is to lift steel sections.

The Shanghai Hongqiao Transportation Hub covers an area of 26.26 km2 to the west of Shanghai and is the first of its kind to be built in the Asia Pacific region. It integrates a high-speed railway link between Shanghai and Beijing, a maglev train extension line from Longyang Station in Shanghai to Hongqiao, a terminus for the inter-city railway systems of the Yangtze Delta Area, connecting Shanghai with Nanjing, Hangzhou, Wuhu and Anqing, and stations for bus transport and the urban metro system.

Self Erecting Tower Cranes May Save Costs