A stage being built in France for a concert by pop star Madonna has collapsed, killing one worker and injuring six. 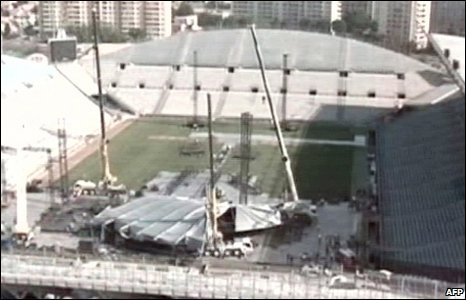 Technicians had been setting up the stage at the Velodrome stadium in Marseille when the partially-built roof fell in, bringing down a crane.

A French worker, 53, was killed and two of those hurt, a Briton and a US citizen, were seriously injured.

Madonna said she was “devastated” by news of the accident.

The concert, planned for Sunday, was cancelled.

Fire-fighters said the accident occurred when the roof of the stage became unbalanced as it was being lifted by four cranes, toppling one of the cranes which crashed on to the structure below.

About 50 people from a range of nationalities were working to set up the structure, city sports official Richard Miron said.

Up to a dozen people are believed to have been underneath the stage when the accident occurred at around 1715 (1515 GMT).

“Since it did not collapse right away, that allowed several people to get out, to avoid being hit,” he said.

Madonna, who is performing on her Sticky and Sweet tour, was in Udine, Italy, when she received news of the incident.

“I am devastated to have just received this tragic news,” she said in a statement released by the organisers of the concert.

“My prayers go out to those who were injured and their families along with my deepest sympathy to all those affected by this heartbreaking news.”