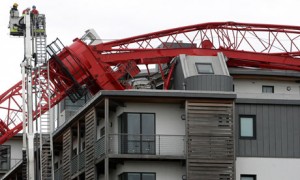 Industry experts have come up with two likely scenarios as to how a 60m tower crane toppled over backwards onto an apartment block in Liverpool on Monday.

The counterweight on the machine, thought to be a Wolff 500 belonging to hire firm HTC, smashed through the roof of the block, while the luffing jib flipped backwards over the building.

Poring over photographs of the accident on ContractJournal.com, experts speculated that:

Inspectors from the Health and Safety Executive (HSE) have started their investigations into the accident, in which the crane driver was thrown from the cab (which has its door at the rear) and sustained serious injuries.

Main contractor Bowmer & Kirkland (B&K) said the machine was lifting at the time and working well within its design limits but would not disclose the nature of the load or the lifting operation.

A fatal 2007 tower crane collapse in Liverpool occurred when a sudden gust of wind hit a light, close-radius load and lifted the luffing jib, causing the luffing rope to become loose and snag. The rope worked free causing the jib to free-fall until the slack was taken up whereupon the jolt caused the jib to fail.

A similar sudden gust of wind cannot be discounted at this stage.

Alternatively, if there was an undetected problem with the foundations/cross base or a lower tower section, luffing the jib to work at close radius with a light (or no) load would mean the counterweight would exert a higher bending moment on the tower and foundations. This could expose any undetected problem and lead to a catastrophic collapse.

“If the crane fell backwards, the jib would act like a slingshot and be catapulted past the vertical position making the situation even worse,” said one expert.

Both B&K and HTC said they were unable to make further comments.