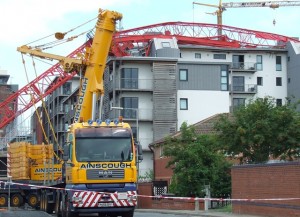 THE difficult task of removing the collapsed crane tower which smashed into an apartment block began today.

Two massive rescue cranes arrived in the city this morning to carry out the job.

Specialists from the Health and Safety Executive (HSE) yesterday assessed the scene to establish that it was safe to remove the damaged machinery.

Once the damaged crane and five-tonne counter-balance have been removed, search and rescue teams will resume their intensive search of the rubble beneath the crushed buildings to double- check everyone got out safely.

The arrival of the two giant rigs – an 800-tonne crane from London and a 500-tonne crane from Leyland – comes after it emerged that the Merseyside’s specialist fire officers, who are trained to direct complex search and rescue missions, were all out of the city when the crane collapsed.

When the crane from Shaw’s Avenue onto the apartment block on Monday both chief fire officer Tony McGuirk and assistant chief fire officer Bill Evans were on annual leave. Mike Hagan, who was covering for CFO McGuirk, was in London with three Merseyside councillors at a business awards bash at Clarence House

Area manager Dan Stephens, the force’s fourth in command, started the day 150 miles away in Gloucester, but was able to get back to the city within an hour, the service reports.

Urgent checks have been carried out on a second crane at the scene of the accident to ensure there is no domino effect or operating issues.

Glenn Maguire, a film director living at Chandler’s Wharf, is one of hundreds who have been evacuated from the surrounding buildings for up to a week by city surveyors amid fears of structural damage to the foundation.

He told the ECHO: “I’ve been working from home for a few days, but this has meant I can’t get back in for seven days, and I’m losing contracts hand over fist.”

Written By: Richard Down, Liverpool Echo