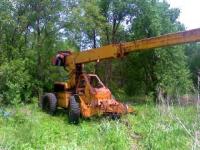 There is not very much information regarding this accident but as you can see it was a very old crane.

SALINA, Kansas – One man is dead after an apparent crane accident in Salina.
Police say a couple of people were trying to jump-start an older model boom crane in the 1300 block of E. Woodland shortly before 11:30 Wednesday morning. When it started, it rolled on top of a man standing behind it. He died at the scene. His name has not yet been released.
The investigation is still ongoing at this time, but police say it does appear to be an accident.
msnbc