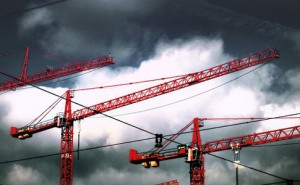 Tower cranes are leviathans that lighten man’s bigger burdens. Construction work at larger building complexes cannot be handled without the help of tower cranes. The huge crane is generally the most conspicuous sight at a construction site. It is a mammoth bit of machinery, and the human being who controls its operations appears like a tiny speck atop it. The main part of a tower crane is its central mast. What is known as a slewing jib, which is the crane’s long arm that can be rotated in a full circle, as well as a slewing unit, is attached to the top of the mast. The slewing jib is a long lattice structure, triangular in shape. The slewing unit is the motor and gear mechanism which enables the slewing jib to rotate in all directions.

There is a trolley that runs along the slewing jib and this trolley lifts the objects and materials to be moved, and positions them at the required point. The lifting mechanism consists of pulleys and wire ropes that are attached to the trolley and the jib, along with Forklift attachments. To lift bigger weights the load has to be positioned nearer to the mast. Lesser loads can be maneuvered even if they are hung at the tip of the crane’s arm. The power to lift and move the loads is provided by the motorized winch located at the other end of the jib. The crane operator’s cabin is attached to the top of the mast. The operator controls the movement of the jib, and thereby the lifting and positioning of the loads, by means of joysticks and other push buttons on the control panel located in the cabin.

The central mast of the crane is anchored to a concrete base at the construction site with anchor bolts specially designed to take up the stresses and loads of such a huge machine. This concrete foundation, that supports the crane at the site, has to be constructed according the crane manufacturing company’s specifications, to suit the design of the tower crane. Counterweights are provided at the opposite end of the jib to balance the arm while it is lifting heavy weights. The height of a tower crane can be increased or decreased according to requirement. Additional mast sections of 6′ or 10′ or 20′ are provided with the machine, and these can be affixed to the mast to increase the height, and later detached when necessary.

Some types of tower cranes have better mobility since they are mounted on a rail and so can be moved backward and forward. Here the crane base is designed to move on the rail and is fixed to the track with rail clamps. When they are not in use, rail-mounted tower cranes are kept locked on the tracks to ensure safety.