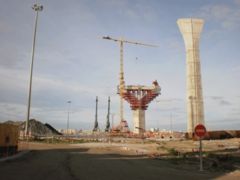 Two Linden Comansa tower cranes are helping to build a 3,157 m long suspension bridge across the bay of Cádiz in Spain. The €300 million (US$ 404 million) bridge, named La Pepa, will cross 1,655 m of water when it is completed in 2011. It will connect the city of Cádiz, on a narrow peninsula at the end of the bay, with the rest of the province. It will also alleviate traffic congestion on the existing Carranza Bridge which has 35,000 vehicles crossing it each day.