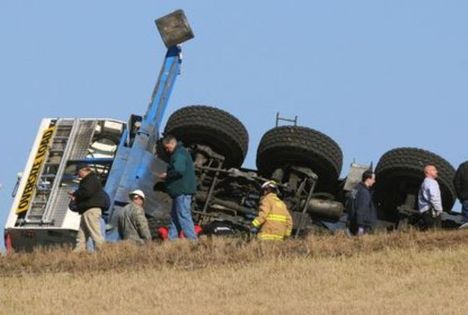 A four axle All Terrain crane tipped over and trapped the operator yesterday at an old phosphate plant in north Manatee County, Florida.

The crane was working from the top of a sandy berm around a retention pond at the former Piney Point phosphate mine. The operator had just extended his boom to lower some equipment into the pond when the sand gave way beneath the crane’s outriggers causing it to slip and overturn.

The operator, 52, attempted to lower the load as soon as the crane began to shift, but was not able to do it fast enough. He was trapped in his cab for more than two hours and had to be cut out. He was then airlifted to a hospital in St. Petersburg where he was treated for several injuries including a broken leg.

The work was being carried out on behalf of HRK Holdings, which is responsible for maintaining the watershed at the condemned mine site.