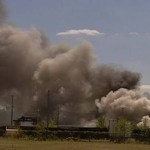 A fire broke out at a steel facility in Fort Wayne, Indiana after a crane boom came into contact with high tension overhead power lines yesterday. The crane was working at the Mid-American Steel plant when it touched the power lines causing a massive arc which then ignited a large pile of tyres stored close by. The power lines were deactivated by the emergency crew and at least two fire departments were working on dousing the flames. As far as we know no one was injured in the accident.