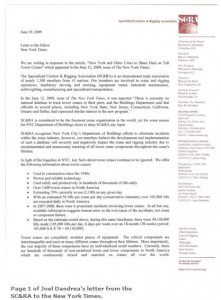 Page 1 of Joel Dandrea’s letter from the SC&RA to the New York Times.

On behalf of the 1,300 members of the Specialized Carriers & Rigging Association, Joel Dandrea, executive vice president, has submitted a letter to the editor of the New York Times in the US in response to an article that appeared in the June 12, 2009 issue of the newspaper.

The letter takes issue with the article, titled New York and Other Cities to Share Data on Tall Tower Cranes. It rebukes information contained in the article, and questions data used by the New York Department of Buildings to determine how a tower crane database can create a safer work environment for employees and protect the public.

The letter stated that while SC&RA recognizes New York City’s Department of Buildings efforts to eliminate incidents, the association’s members “believe the development and implementation of such a database will severely and negatively impact the crane and rigging industry due to unsubstantiated and unnecessary tracking of all tower crane components throughout the crane’s lifetime.”

The letter continued, “In light of the tragedies in NYC, key facts about tower cranes continue to be ignored.” The letter points out that tower cranes have been used in construction since the 1940s; are a proven and reliable technology; are used safely and productively in hundreds of thousands of lifts daily.

The letter said that more than 3,000 tower cranes are used in North America and estimates that 70 percent of those (2,100) are in use on any given day. The SC&RA stated that with an estimated 50 lifts per crane per day (conservative estimate), more than 105,000 lifts are executed daily in North America.

The SC&RA contends that a database, such as the one proposed, will not prevent crane accidents. “In 2007-2008, there were six prominent incidents involving tower cranes. In all but one, available information suggests human error as the root cause of the accidents, not crane or component failure.”

The letter also takes issue with the ability of a city to accurately keep up with tower crane components: “Tower cranes are completely modular pieces of equipment. The critical components are interchangeable and used on many different cranes throughout their lifetime.

“More importantly, the vast majority of these components have no individualized serial numbers. Currently, there are hundreds of thousands of non-serialized boom and tower components in North America which are continuously mixed and matched on cranes all over the world.

“If you consider bolts and pins in the equation, you are talking about close to one million interchangeable components in North America alone – most without individual identification. Given these staggering numbers, it is clearly evident that lifetime tracking of tower crane components is a virtual impossibility.”

SC&RA has long been an advocate of crane safety. Working with the U.S. Department of Labor over 12 months, members of the SC&RA were significant stakeholders in developing a recommended proposal for a construction safety standard for cranes and derricks, Subpart N of 29 CFR part 1926. SC&RA was officially represented on OSHA’s Cranes & Derricks Advisory Committee (C-DAC). SC&RA members have been instrumental in the development of regulations in several states.

Dandrea continued, “Perhaps the NYC Department of Buildings could benefit from the expertise and knowledge of our members as did the Federal Occupational Safety & Health Administration. It is important to note that the members of C-DAC had the benefit of, and took into consideration, independent industry and government studies that were years in the making.

“In fact, a thorough review of historical accident data clearly did not indicate any need for a national crane database. Over 60 percent of crane accidents in this country are caused by contact with power lines, improper crane assembly and disassembly, and poor ground conditions. In fact, this issue is a red-herring being used for political gain and takes unnecessary attention away from the main causes of crane accidents.”

Dandrea suggested that there are many questions that should be answered prior to moving forward with the implementation of a tower crane database such as costs, maintenance, what are critical components, internationally dispatched cranes, etc. In the letter, he poses questions, “What statistical data were used in determining that a tower crane database will create a safer work environment for employees and protect the public? In addition, one has to question the practicality as well as the effectiveness of the proposed New York tower crane database plan in eliminating crane accidents.”

In respect to the tower crane accident in 2008 attributable to component failure (9151 St., NYC), Dandrea asked how would the existence of a crane data base have served to prevent or minimize the likelihood of this accident?

“The replacement part that failed was a manufactured product for which the welds had been inspected by independent experts and approved by the City inspectors as well. All that a crane data base would have shown was that the crane had been repaired, a fact already known to all relevant parties. It would not have helped predict or prevent the accident.”

Dandrea stated, “It is in everyone’s best interest to work cooperatively together toward a safer crane industry rather than separately in a vacuum. It is our members’ belief that working together cooperatively with government, industry, manufacturers, unions, and safety professionals will lead to better and more reasonable legislation for all involved and, ultimately, to a much safer crane industry.”

In the letter Dandrea welcomes the opportunity to meet officials of NYC’s Department of Buildings to discuss viable and mutually beneficial options to reduce crane incidents. “NYC’s Department of Buildings continues to operate on a ‘solo’ mission facilitating only their personal agenda and refuses to take input from leading industry members of SC&RA.

“One has to ask why the NYC Department of Buildings would not welcome the expertise and experience of our members to assist in their efforts to minimize crane incidents within their jurisdiction?”

Why can’t you get more referrals?