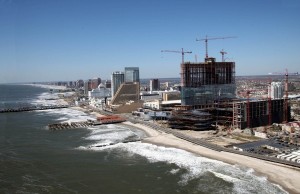 A tower crane collapsed on the Revel Casino project during high winds. The cranes on the project appear to be Potain 485’s. As of November there were six on site and it is’t clear as to how many are currently on site. The job appears to be wrapping up and the visibility of the cranes is poor in the news stories. It’s clear that there are two cranes still on the high rise even though one of them now simply consists of the mast of the crane. It would appear that the entire super structure was ripped off the crane.

The winds were severe enough to take down two houses during gusts. I haven’t been able to find what kind of gusting there was at 500 feet yet, but on the ground, taking out two houses is pretty severe. A local firefighter that was interviewed noted that it was the worst wind storm he had ever seen.

The collapse appears to have damaged enough of the building that debris was flying up to six blocks away. A police officer was struck by debris inside his cruiser and was taken to the hospital.

When erecting cranes you do need to consider what the winds in the area are like. If you are in Florida where hurricanes come every few years, it might not be a good idea to erect a max free standing crane to 300 feet even with the larger bases. Wind speeds climb quickly as you gain in elevation. The added surface area lends to the winds ability to push the crane around, plus it adds leverage in the winds favor in terms of the over turning moment. In this particular case, it may be that the accident was virtually unavoidable and simply caused by nature.