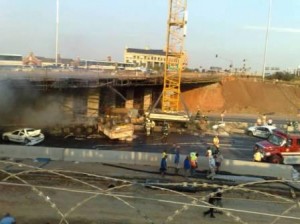 Pretoria, South Africa A truck travelling down the N1 highway lost control slamming into four cars and a tower crane that was erected in what appears to be the median between the two directions. It was assisting in the building of a bridge. One report says that the crane was moved over a meter with the supports damaged. Looking at the picture the crane is clearly out of plumb but still standing which is a testament to the cruciform base design that it is sitting on.

The base is ballasted with knee braces running up to the first tower. The concrete ballast generally sits on the steel beams that support the tower without much to secure it. Under normal circumstances there is little to no movement at this point on the crane so it’s rare that the weights would be subjected to movement. The shock of the truck hitting the crane hard enough to move it and knock it out of plumb could have easily knocked off the ballast and then there would be little chance of the crane remaining vertical.

The crane was dismantled and they will start over with a new crane to protect the public. The only lesson to take away is think of the worst case scenario and maybe build a reinforced concrete wall around the crane when it is exposed to traffic. This happened one other time, to my knowledge, in 2007 when a car hit a concrete pedestal that a crane was sitting on. The engineers whom designed this crane, the pad, and otherwise, did an outstanding job and this is why the crane stood possibly saving multiple lives as traffic would have been careening towards a falling crane with no where to go.