Mother of All Near Misses 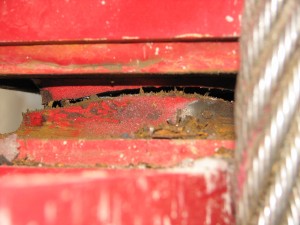 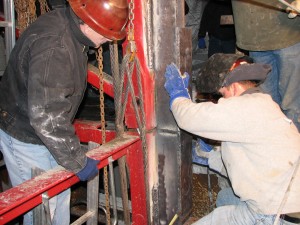 Blue Cross/Blue Shield in Chicago was adding 24 floors onto their existing 33 story building downtown Chicago. The building was entirely being constructed out of structural steel sans concrete core. The hoisting was being done by two Potain MR605’s which are big luffing tower cranes. One of those cranes nearly came tumbling down from over 600 feet. Great decisions prevented that from happening. This is the story of the nearest miss I’ve ever seen. And I’ve seen a few.

The crane operator had an unloaded hook. He’s running the crane when he hears a loud bang and feels movement from what feels like the tower. He stops to assess what has caused it. The Bellevue crane that survived in the above story, Same thing. Unusual noise and shutter… stop and go see what that was. The crane that collapsed in Bellevue it happened during the crane erection, but we couldn’t get anyone to believe that it was a problem. I had an intermittent popping in a cross base once that wasn’t showing what the cause was. Eventually my ballast started spalling on the frame and cracks were developing in the concrete. We decided that it was torsional loading causing the base to flex. We called in an engineer to design a stiffening method and the problem went away. The commonality… stop and assess.

The towers are connected by pins. The upper section is hollow (with reinforcing) angles with holes milled to accept a set of pins, and from the tower below, a dowel of sorts also milled to accept the pins. It’s a tight positive connection. This dowel which cannot be viewed once the tower is connected is what failed. A crack caused a full separation in the leg connection. This crane was effectively three legged instead of four at this point. Private discussions that I’ve had with some that were there claim that engineers familiar with the equipment said that the engineering numbers showed that the crane should not be standing.

The crane was secured by welding a box frame to the outside of the tower leg. The project was nearly finished so the other tower crane was used to dismantle the nearly fallen tower crane within a few days. Since then all of these towers have had their connections reviewed and NDT tested at a cost to Manitowoc. The Technical Service Bulletin asks that pitting corrosion, cracking, and even scratches in the paint in this dowel area are cause for further review. Thisarticle has some decent pictures of what to look for.

So what caused the problem. There is a hypothesis that has been developed. The building was again made of structural steel. Structural steel flexes quite a bit. A job in Portland years ago had a Liebherr 630 tied into it’s structural steel building. In order to plumb the building, they had to balance out the crane first to remove it from pushing or pulling the entire building around. If you have two tower cranes tied into structural steel and don’t have all off the steel as rigid as possible, including diaphragm, then you raise the crane, and add more steel which you will make plumb and rigid, you are likely to add loading to the crane’s mast by pushing it around, and out of plumb. Additionally you have two cranes pushing that steel back and forth on each other adding loading that is unintended in the tower design. We may never know 100% why, as it could have had inclusions in the steel, Porosity, pitting, etc… we can only learn from the potential problem and seek to prevent it in the future.

I applaud the operator for his wise decision making. I’d name him, but I’m not sure that he wants that kind of attention. Dogging everything off and finding that problem was exactly the right answer. Potentially hundreds of lives were saved. To gasp the scope of this… the crane is 600 feet up with 160 feet or so of jib. The break is 20 meters of tower down. So if the crane fails entirely, you have about 250,000 lbs of steel and concrete coming down from 600 feet 230 feet long into a busy street an hitting occupied buildings. Locals 1 Ironworkers and Local 399 Operating Engineers proper training saved lives even though most never knew about it.