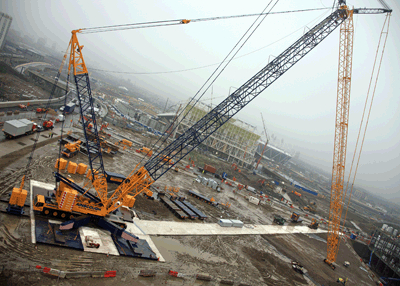 Portable roadway rental company Lion Trackhire provided a temporary track for a 1200 t crawler crane working at London’s 2012 Olympic Village site earlier this year. The crane, supplied by Ainscough Crane Hire, was being used to lift cooling equipment onto the roof of the new Marks and Spencer department store that is being built as part of the Olympic Village complex.

Lion Trackhire built a 6 m wide access road and a 900 m2 platform to provide access and a working area for a 500 t mobile and 1200 t capacity crawler crane. The 500 t machine was used to build up the massive crawler crane.

Nigel Hartill, of Simpson York, the main contractor who hired Lion for the project, said; “Not only did Lions’ staff come down to build the temporary road over the holiday period between Christmas and New Year which is something we really appreciate, they also sent a team down in the early morning after the crane operation was completed to start removing the panels which meant that there were no delays on the job.”