A small crawler crane has overturned while working on the demolition of earthquake damaged buildings in Christchurch, New Zealand on Saturday.

The crane, a 50 to 60 tonne lattice crawler was removing concrete panels from the façade of a building in the city’s red zone when it lost stability and tipped forward, the boom fell between two buildings and dropped the panel onto a pickup truck in a street on the far side of the building. 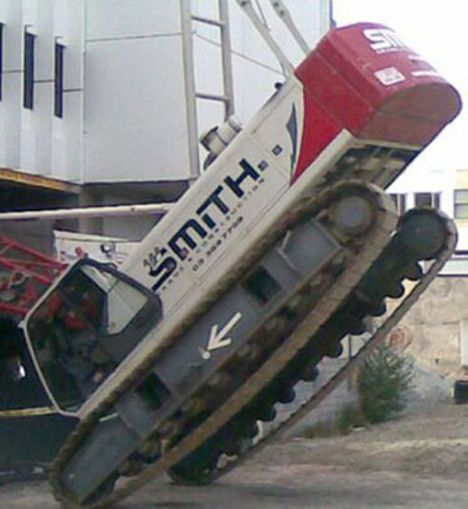 Fortunately no one was hurt in the incident. The Labour Department is investigating the incident which occurred on a site managed by Naylor Love Construction. The crane is owned by local crane company Smith Crane & Construction.

A spokesman for the contractor said that it was investigating the incident and did not know what had caused it. It also said that it had informed the Labour Department and the Canterbury Earthquake Recovery Authority.

This appears to be a simple case of overloading, although that cannot of course be confirmed. The trouble with taking hold of a load in the air is that should the weight have been underestimated there is little the crane operator can do. As with tree limbs there is a need for this type of work to build in a far more significant margin of safety that with regular lifts.