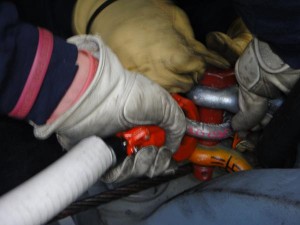 Working with a crew this week was a reminder about how easy it is to get rigging hardware fouled and lose a finger trying to free it. We were rigging up the vertical lines needed to support a self-powered work platform. The hoist used to lift the lines hooked into either a block shackle or thimbled wire rope eye, depending on the line being rigged. Once hoisted to the upper connection point, a shackle pin passed through the suspended shackle or eye. Slowly the hoist hook was lowered to allow the lines to be supported by the upper rigging. When the work platform tasks were completed, the rigging process would be reversed in order to get the suspension rigging and lines back down to the ground.

This transfer process can go well or disastrously depending on the attention to details. The following are just a few helpful hints that can lower the risks associated with transferring tensioned rigging. Though the actual load weight may be less than 1,000 lbs, its dropping can cause injury, death or significant equipment damage.

1. While hoisting the rigging (blocks and lines) for connection, using a locking style hoist hook can help avoid hook fouling. The standard hook tip can snag on objects, suspended lines or rigging blocks and hardware during the lifting and positioning process.

2. Using an oblong master link as the transfer hardware provides a large arching curve at each end for connection. Picture a rigging block being hung to accommodate a 2-part line to a suspended platform. Its upper connector is a swivel shackle. If a master link is pre-placed into the block shackle, it can serve as an easy-to-access rigging suspension point. A master link will rotate 20-30 degrees left/right in the block shackle bow, allowing for best final alignment.

3. Consider using a short chain sling (2′-4′) with a locking style hook at each end, to “jump” between the upper dedicated suspension point and the hoisted rigging. These are easy to connect/disconnect and eliminate the need for handling shackles/pins over open spaces. Remember, the chain sling and all rigging need to be rated for the maximum intended load of the work platform, its occupants, tools and materials.

4. Caution should be exercised when de-rigging. The hoist hook needs to be properly seated before it takes tension. While de-tensioning, if a suspension shackle has been unloaded using the hoist, it should be removed with great care. Fingers can be lost if the hoist is “adjusted” up or down during the removal process. Sounds obvious, doesn’t it? If there is one person dealing with the connection and one person working the hoist, there are two brains at work, which might not be synchronized. Communication is absolutely critical during the entire rigging activity, but even more so when installing or disconnecting rigging hardware.

Well, lots more could be said but I won’t.

As Roy Rogers would say, “Happy Trails” to my rigging friends.