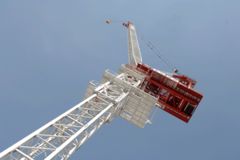 Chinese tower crane manufacturer Yongmao showed its new 50 tonne capacity luffing jib tower crane at bauma China 2010.  After the show the first unit goes to work on a site in Shanghai. The STL1000 was sold to Tat Hong China. It will join about 700 other Yongmao tower cranes in China, according to the manufacturer.  Maximum jib length is 60 m where it will lift 6.5 tonnes on a single line at full radius. At 30 m radius with 30 m jib the chart shows capacity at 30.87 tonnes on two falls of rope.  Next in development from Yongmao is a 100 tonne capacity luffer. At the time of writing it was on the drawing board and the first unit should be built by the middle of 2011. It will be aimed at power station construction.  Pictured with the new 50 tonne capacity STL1000 Yongmao luffer, from left to right, are: Terence Lee Swee Khim, Yongmao sales manager; Chan Chuek Tim, Yongmao dealer in Hong Kong AST Equipment director; Jervis Teo, Yongmao dealer in Malaysia Yekon equipment managing director; Tian Ruonan, Yongmao CEO; Sun Zhaolin, Yongmao chairman.