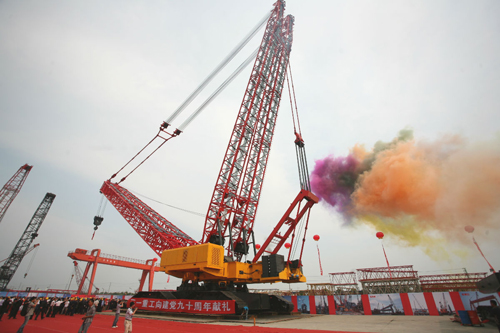 The Sany crawler crane SCC86000TM boasts a maximum lifting capacity of 3,600 tons, higher than the maximum torque and capacity of any 3,200T crawler crane of the world, and is believed to outpace any rival in the world in terms of lifting and torsion force, according to the company.

Its development adopted the most sophisticated design methods such as limit state design, digital prototyping and top-down design, overcoming the design challenges of non-linear structures and large deformation. This crawler crane pioneered in using the GB3811-2008 high-risk coefficient recommended for lifting machines used for nuclear industry and achieved a substantial break-through in structural design and control system. As of now, the product has applied for 30 patents, and some technologies have also applied for patents in countries like Germany and USA.

SANY Group will change the world with its quality.