The 400 tonne Tadano Faun ATF 400G-6 unveiled in May has now been shipped and carried out its first job.

The first unit has now been delivered to German based crane company Mayer headquartered in the town of Burgberg in the south of the country. The company put the crane straight to work on a difficult and complicated job, replacing the starting ramps of one of the two ski jumps in Oberstdorf in the Bavarian Alps.

The challenges began with the approach to the jobsite, through the narrow local roads. The route involved the crossing a number of relatively small bridges, passage through the village, then face a series of blind summits, hairpin bends and a very steep final climb up the mountain side to the ski jumps. 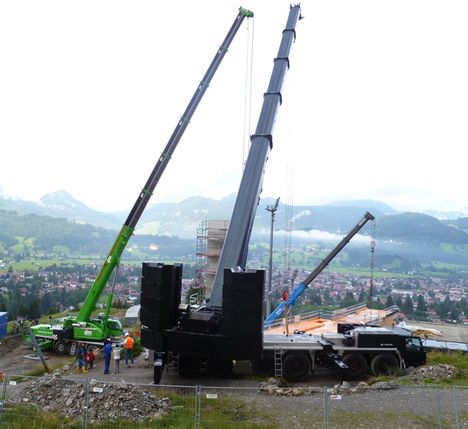 The last three kilometres were so challenging that the support trucks had to stop and transfer the items such as counterweights to small transport vehicles, so the fact that no supplementary superlift system was required helped in terms of costs and set up times.

The 400 tonner worked with two smaller cranes of 200 and 220 tonnes to lift the ski jumps at the Erdinger Arena. As the job commenced the 200 tonner developed a fault and was replaced by a 220 tonne Tadano Faun ATF 220G-5 from Glass Bau, a locally based rental company from Mindelheim. This naturally encouraged the Tadano Faun engineers and factory technicians who were on site to witness the cranes first lift and be on hand in case of any issues. 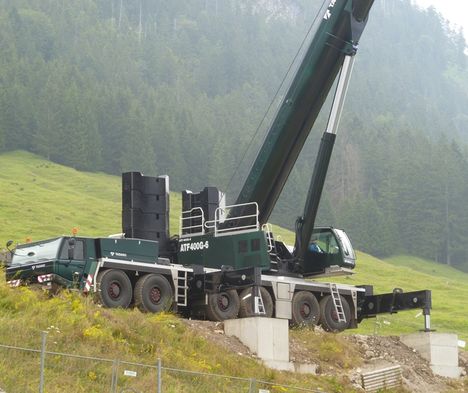 The approach ramps to the ski jumps weight around 100 tonnes each, the top was lifted by the two Tadano cranes, while the third crane handled the lower end of the ramp. The ATF 400G-6 worked at a radius of 28 metres with 35.2 metres of main boom. It set its outriggers on specially engineered concrete supports built into the side of the mountain. In this configuration the crane can handle 36.9 tonnes, more than enough given that the smaller crane, working from the other side of the ramp was positioned significantly closer to the lift.

When Tadano launched the ATF 400G-6 it said that its objective was to introduce a crane with the strongest boom and the best lifting capacities without the need for boom suspension/superlift systems. It says that this can bring significant savings in transport and set up times – highlighted in this application. In spite of the declared objective, the new crane can be ordered with the ‘Power System’, a boom guying system – along with a variety of luffing extension and jibs.