The Terex AC 1000 is the world’s most powerful all-terrain crane that can travel on public roads with its boom. Neeb-Schuch GmbH recently took advantage of this and used the crane to erect wind turbines for two different projects.

The all-terrain crane arrived to the first site in Landesbergen, near Hannover, while carrying its 50 meter telescopic boom. There, the crane had to erect four ENERCON E70 wind turbines with a hub height of 84 meters, two at one location and the other two at a neighboring one. The maximum weight for each load lifted was 66 tonnes.

The crane was set up with an SSL configuration, a 188 tonne counterweight, and a 54 meter-long luffing fly jib on a 12 meter variable extension (VA). A three-sheave hook block was installed with five wire ropes in order to pick up the load with a 13.5 meter outrigger. The AC 1000 required one assist crane to mount its four outriggers, set hoist 0, mount the SSL system, extension adapter, and luffing fly jib – the rest was rigged by itself. “This meant that we were able to set up the huge crane for the first two lifts in no time with only three workers. As for the lifts, they went perfectly smoothly,” explains crane operator Reiner Wege. He extended the main boom in three steps for the procedure, starting at 29.9 meters, then extending to 34 meters, and ending at 39.1 meters.

The AC 1000 showcased its high level of flexibility when it had to move to the project’s second site, traveling a distance of about 500 meters with a configuration that included the luffing fly jib’s base, the extension adapter, the superlift system, the mounted outriggers, and 68 tonnes counterweight. The 270-tonne colossus traveled through an unpaved country road which was meant for tractors. “Of course we left nothing to chance,” explains Terex Support team member Rainer Staab, who supervised the project on site. “The design engineers in charge calculated the exact load distribution and the road’s load-bearing capacity in advance and gave us the go-ahead.”

For the last two lifts, the crane was placed about 30 meters in front of the wind turbines’ foundation and had to work with a large working radius. Just as in the previous lifts, the machine lifted a maximum total load of 66 tonnes. Rainer Wege was also able to easily handle these lifts with the AC 1000: “Even though I was already familiar with Terex equipment after countless projects using the AC 500, I was surprised at just how quickly I became comfortable operating the AC 1000,” reports the crane operator.

The Terex AC 1000 all-terrain crane’s second assignment was at a site in Benhausen, Paderborn, where the Neeb-Schuch team also erected an ENERCONE70 wind turbine. In contrast to the previous assignment, the tower was a concrete structure made up of 22 rings, each one with a height of 3.80 meters, totalling more than 80 meters. Also, in this case, the maximum weight of the concrete elements was 84 tonnes. The crane’s superlift configuration was identical to the one in Hannover.

The area for crane set up proved to be tricky as the roads that were prepared were too close to the wind turbine’s foundation. This meant that the AC 1000 luffing jib had to be set up over open, unprepared terrain. Thanks to the small dimensions of its components and the patented luffing fly jib erecting system, the crane was set up quickly and without complications.

The crane was in service for several hours, as the tower’s structure required a large number of lifts. “The AC 1000 easily and smoothly handled almost 50 lifts without the slightest variation in precision, the highly effective and easy-to-use IC-1 touchscreen control system played a very important role,” explains crane operator Rainer Wege.

“Just as we expected, the Terex AC 1000 proved itself in these two projects and showcased both its outstanding performance characteristics and high degree of flexibility,” summarizes Terex Support team member Rainer Staab.

The nine-axle Terex AC 1000 is the world’s most powerful all-terrain crane that can travel on public roads with its 50 meter main boom. With 20,31 meters in length, the AC 1000 is remarkably compact and maneuverable for a 1,200 tonne capacity class crane. The machine can travel with its 50 m-long main boom on public roads to nearly any location in the world and has the fastest setup times of any crane in its category thanks to its patented luffing jib erecting system. Having a maximum system length of 163 m, the wide selection of extensions and attachments for the unit have been designed for transportation on standard trailer trucks, eliminating the expensive and time-consuming process of obtaining permits and having to use special-purpose vehicles.

The AC 1000 is available with a 50 or 100-meter main boom, which is equipped with a patented, open nose sheave that makes it particularly easy to attach additional boom segments. This allows short rigging times to reach 100 meter lifting height. In addition, the optional SSL system increases the machine’s lifting capacity for a variety of applications.

The ergonomically designed crane cab, which can be tilted 20° backwards, is equipped with an integrated IC-1 touchscreen control system. This system allows operators to have quick access to important information such as wind speed, wind direction, hook load, rated lifting capacity, reach, boom length, and calculated and actual outrigger loads by simply tapping the screen.

Wuppertal-based Neeb and Speyer-based Schuch, both renowned crane service providers, founded joint venture Neeb-Schuch GmbH in 2011 with the goal of creating a company that would specialize in special-purpose and giant machinery for international projects.

In addition to its headquarters in Wuppertal, Neeb Krane has branches in Solingen and Remscheid (Germany), Zaragoza (Spain), and Sibiu (Romania), enabling it to cover all of Europe.

Terex Corporation is a diversified global manufacturer of a broad range of equipment that is focused on delivering reliable, customer-driven solutions for many applications, including the construction, infrastructure, quarrying, mining, shipping, transportation, refining, energy, utility and manufacturing industries. Terex reports in five business segments: Aerial Work Platforms; Construction; Cranes; Material Handling & Port Solutions; and Materials Processing. Terex offers financial products and services to assist in the acquisition of equipment through Terex Financial Services. More information can be found at www.terex.com. 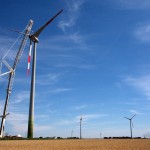