﻿The case of a tractor driver killed by a run-away crane last March has begun. The jury heard yesterday how the driver of a mobile crane had used his brakes for “too long and too much” as he came down a steep hill at East Morton, near Bingley.

Crane driver Allan Woodrow, 49, of Standage Road, Hull, appeared at Bradford Crown Court yesterday. He has pleaded not guilty to causing the death of Colin Chew of Belle Vue Farm, Micklethwaite, by dangerous driving and also by causing his death by careless or inconsiderate driving on March 26, 2009.

Link below for original news story 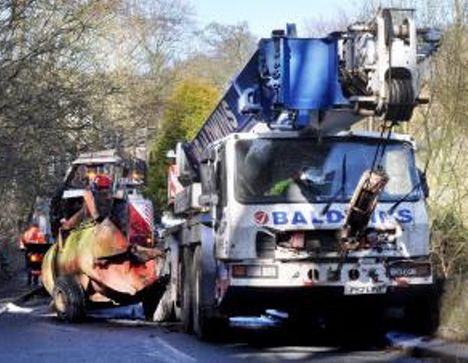 Mr Chew was flung from his tractor in Otley Road, East Morton, when the crane struck it causing it to roll several times. The crane then crushed a parked BMW before continuing down the road with the trailer still attached to it. Mr Chew was left lying in the road with serious head and leg injuries. He was taken to hospital but could not be saved.

The court heard witness Richard Kernick, who had been driving behind Woodrow before the impact, describe how he had seen the crane slow down as it approached road warning signs and then start to go down hill.

As it turned a right hand bend further down heading into the village it suddenly “shot off very fast”, he said. The jury also heard when Woodrow was first interviewed by police at the scene he immediately said his brakes had failed despite him using the footbrake.

However, when he was interviewed later at the police station, he said he had selected second gear and put his foot on the exhaust brake on the crane and uses the vehicle’s engine to slow it down.

HGV drivers are told best practice on a long descent is to avoid long braking, to choose a low gear and use the exhaust braking system and only very occasionally to use the footbrake.

Collision investigator Keith Raynor said at the scene he could smell a strong odour indicating there had been a brake problem and that components had got too hot. When the vehicle was first tested it showed the brakes had been working but when it was dismantled it revealed its brake linings had overheated causing brake fade.

It would have appeared to Woodrow that the brakes had failed at this point but no matter how hard he would have pressed, it would have had no effect and would only have exaggerated the problem, said Mr Raynor.

The only way the brakes could have worked again is if they had been allowed to cool down first.

“They had been used too long and too much” said Mr Raynor.

Rescued from collapsed crane at shipyard