Bullish demand from the Americas has seen sales for Liebherr mobile harbour cranes (MHC) double this year compared with 2010 as demand for investment in cargo handling equipment remains unbroken, says the global manufacturer.

By the end of 2011, 25 MHCs will be delivered to various customers throughout the Americas; 18 machines to Latin America and further seven machines to Canada and the USA.

In Brazil, Triunfo Operadora Portuária purchased one LHM 180 for its general cargo handling terminal in Rio de Janeiro, Brazil. This crane will be used to move offshore cargo for Petrobrás.

In Chile, Portuaria Lirquén is operating a new LHM 550 (pictured below) equipped with the new Pactronic Hybrid Drive System. 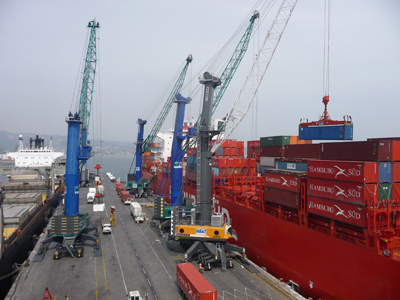 At the moment the finger pier in Lirquén accommodates not less than six Liebherr mobile harbour cranes capable of handling two vessels simultaneously.

Also the LFS-series (fixed on a pedestal) was able to continue its effective market launch with the delivery of the third crane of this type to Chile. The LFS 600 was delivered to Electroandina. In addition to its energy business, Electroandina offers port services in Tocopilla, for loading and unloading bulk goods, liquids, and general cargo, including project loads.

There are fireworks everywhere, except in sales.

Now is the time for you to WRITE.