We are still receiving letters from Expo guide that attempt to trick companies into committing to a minimum of €3,813 over three years.

We have been warning about this ‘scam’ since 2003 and yet the letters still come, we receive at least half a dozen each year ourselves and are sent dozens more from readers who receive them. Given the massive cost of mailing it suggests that a large number of companies are still getting caught.

The letters were originally sent out from Construct Data of Austria under the title of the Fair Guide, but after judgments were made against them and people became more aware, the scam moved to Mexico in 2008 and the name was changed. The forms and style are almost exactly the same though, the only change is that the letter and form have been refined in order bind those who inadvertently sign the form contractually. 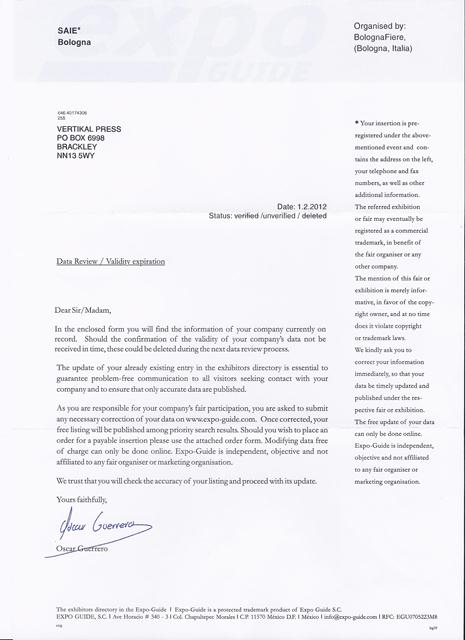 Each letter refers to an event, for example the latest one we have received is headed SAIE Bologna, The name Expo Guide is in the heading, but so faint that you can easily miss it. Down the side of the letter is a full and fair warning that it is not at all affiliated with any trade fair. However it is set in such a way that most busy people would not read it.

The main body of the letter though suggests that your existing entry will expire and that it “is essential to guarantee problem free communication to all visitors seeking contact with your company and to ensure that only accurate data are published”.

This statement is totally and wholly untrue

a)Returning the form has nothing whatsoever to do with the trade show or its listing or any listing at all. In fact it probably does not even assure you are listed on the Expo guide directory which is only a simple listing of people who exhibited at trade shows – its mailing list in effect – the only people likely to use it are cold callers looking to sell you trade fair related services.

b)Trade shows have any number of ways you can communicate with potential or actual visitors, none of which have anything to do with Expo Guide. It is wholly unlikely that you will experience any problems communicating with visitors. 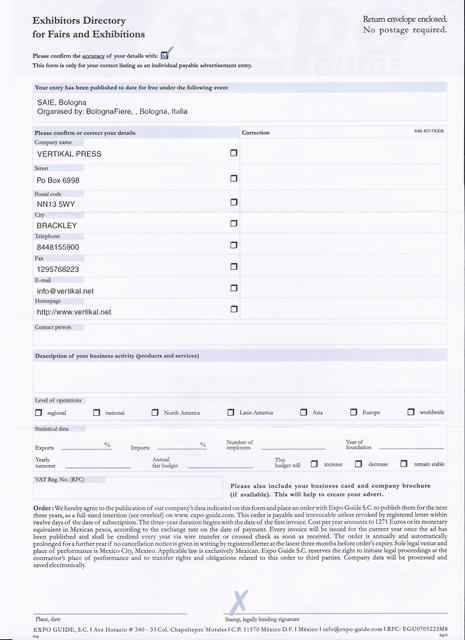 Finally at the bottom of a form in the small print it mentions how you will be invoiced for three years at €1,271 per year with an automatic renewal for a fourth year. A glance at the small print could easily miss the amount and nowhere does it ask you how you would like to pay.

In 2004 a court in Chemnitz ruled against Construct Data that this practice is false marketing and that those inadvertently signing the letters are not obliged to pay them.

Such is the level of this scam that there are websites set up to help those that get caught (click Source link below) and for Americans who get caught it has been brought to the attention of the Federal Trade Commission’s Office of Business Fraud in Washington DC.

Dynamic speaking and presentations are NOT an option.

Are You the Ace of Hearts, or the Two of Clubs?

Do You Have Your Mackay MBA? I Do!

Want to have a great reputation? Earn it!